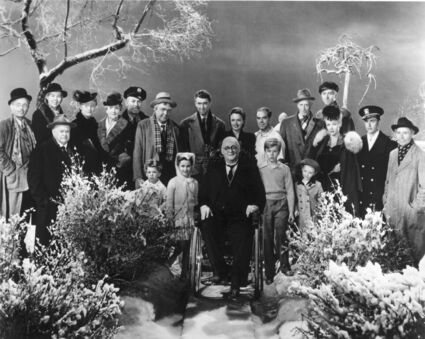 The cast of "It's a Wonderful Life," which marks its 75th anniversary this year.

The following is a post that appears on the Library of Congress website. It was written by Elizabeth Brown, a reference librarian/digital reference specialist in the library's Researcher and Reference Services Division. Her post originally coincided with a related exhibit, "From the Greatest Gift to 'It's a Wonderful Life,'" in the library's Thomas Jefferson Building.

Several years ago, I received a question from a remote researcher who wanted to know what was different between 1943 and 1944 editions of a slim novella. This sparked an interest in how a story that nobody wanted to publish became an award-winning film, and how that largely neglected film became a popular holiday tradition decades later.

The story that served as the basis for the 1946 holiday classic film "It's a Wonderful Life" first appeared under the title "The Greatest Gift: A Christmas Tale." In the story, a strange little man appears from nowhere to save a despairing family man, George Pratt, from a Christmas Eve suicide attempt, restoring Pratt's joy of living by helping him realize his value to those around him. Through the help of the strange man, Pratt's joy of life is revived.

The story's author, Philip Van Doren Stern, wrote in his notes (and in the New York Herald Tribune on December 15, 1946) that the idea for this story came to him "complete from start to finish" while he was shaving on the morning of February 12, 1938. He wrote an outline that day and put it away. The story stuck with him, and after a few months, he wrote what he called a "pretty terrible" first draft.

Stern returned to the story periodically, and after revising it several times, finally showed it to his literary agent in April 1943. The agent liked it, but told him that she thought a fantasy story would be hard to sell to magazines.

She was right. It did not sell.

But Stern liked the little story, so during that holiday season, he had 200 copies privately printed as a 21-page pamphlet. He sent two copies to the Library of Congress with a copyright registration form. He signed most of the others and sent them to his friends as Christmas cards in 1943. Stern's Hollywood agent, one of the lucky recipients, asked Stern if she could "offer the story to the movies." Stern thought that was a crazy idea, but he agreed.

According to Stern's daughter, one day in March 1944, when she was in the third grade, the family telephone rang and she answered it. On the other end of the line was a Western Union operator asking to speak with her father. The daughter feared wartime bad news; her father took the call.

In response to the caller, Mr. Stern called out, "Hold me up, I can't believe it!" This wasn't bad news: the Western Union operator read a telegram from Stern's Hollywood agent telling him the story's movie rights had been sold for $10,000. RKO Radio Pictures planned to turn the story into a movie for actor Cary Grant.

Now that Stern had a contract for film rights, the magazines Reader's Scope and Good Housekeeping, as well as book publisher David McKay, agreed to publish the story. Reader's Scope published a condensed version of the story. Good Housekeeping published a slightly longer and darker version with the title "The Man Who Was Never Born" using the pseudonym Peter Storme. The text of the story as it appeared in the original pamphlet was reproduced exactly in the Mc-Kay book and in magazines and anthologies that published the story in the following decades.

Using Stern's story as a starting point, three teams of scriptwriters hired by RKO wrote three different film scripts, but none quite worked for the studio. In 1945, RKO sold the film rights to the story, along with the three scripts, for $10,000 to Frank Capra's newly-formed film production company, Liberty Films. Capra hired husband-and-wife screenwriters Albert Hackett and Frances Goodrich to create a completely new script, which used some bits from the existing scripts, but also created a back-story with extra characters, filled in details, and made some minor story changes. Capra sent a copy of the script to his longtime collaborator, actor Jimmy Stewart, who enthusiastically agreed to play the lead character.

After its 1946 release, most of the film's reviews were positive. The New York Times, however, found it "a little too sticky for our taste" (December 23, 1946). A 1947 FBI report, Communist Infiltration into the Motion Picture Industry, found the film "very entertaining," but the FBI wasn't fond of the "sympathies" of Capra or the actors and writers, particularly Hackett and Goodrich, who, according to the report, were "very close to communists." Several of the seven writers of the three earlier scripts were also known by the FBI as "prominent Hollywood radicals."

Regarding the plot, the report argued that the portrayal of Mr. Potter as a "scrooge-type" was an attempt to discredit bankers. Also, according to the report, (the main character) George Bailey's rallying for the rights of the common man was "communist in nature." Although the FBI report didn't give credit to the good done by the Bailey family's Building and Loan, a witness to the House Un-American Activities Committee was not troubled by the film, in part because the Baileys were shown to use money "as a benevolent force."

These unfavorable views aside, the film won a Golden Globe Award for best director and received five Academy Award nominations. The film also won a scientific-achievement award for innovations in simulating snow. Previously, movie snow was often made from bleached or painted cornflakes, which looked authentic. Unfortunately, cornflakes were so loud when actors walked on them that dialogue needed to be re-recorded.

For this film, the production crew used large sprayers and fans to blow a combination of fire-extinguisher foam, sugar, water and soap flakes to make "snow" fall and swirl in the sweltering heat of a California summer pretending to be a New England winter.

After its theatrical release, "It's a Wonderful Life" didn't make back the costs of its production and distribution. This is where the story turns to why a nice film that was only the 27th most popular among movie-goers in 1946-47 is so widely known and loved today.

In 1948. Frank Capra and his partners sold Liberty Films to Paramount Pictures. The film's ownership - including rights to the story and the film's negatives - changed several more times.

In 1974, then-owner National Telefilm Associates failed to renew the film's copyright, placing the film in the public domain. This was excellent news for TV stations and home-video companies: with no royalty payments required, television stations aired the film extensively, while home video companies made copies widely available for rental and sale.

"It's a Wonderful Life" reached entirely new audiences during its copyright-free period, but earned nothing for its owners. 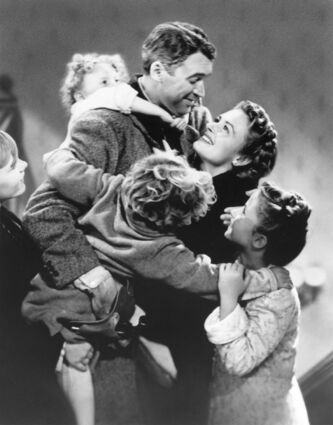 In the film, George Bailey has an emotional reunion with his family after realizing that he's had a pretty good life after all.

In 1993, Republic Pictures took over National Telefilm Associates and, through court action, restored the copyright based on a Supreme Court ruling (Stewart v. Abend, 1990) involving another Jimmy Stewart film, "Rear Window," from 1954. In 1994, with copyright restored, Republic signed a long-term agreement with NBC to air "It's a Wonderful Life" a few times every year. It still plays on NBC stations once or twice each year.

In 1998, Paramount regained ownership of the film and its home-entertainment business, and continues to honor the agreement with NBC. Others may also license the film for broadcast.

Thanks in large part to its temporary lack of copyright protection, "It's a Wonderful Life" became a popular and commercial success decades after its original theatrical release. Over the years, but especially since 1974, the film has also inspired radio programs, stage plays, musicals, songs and episodes of popular television shows.

What a wonderful life it's been for a work that started off as an unpublished short story.