'I Care a Lot' – A Crime Thriller about Financial Elder Abuse 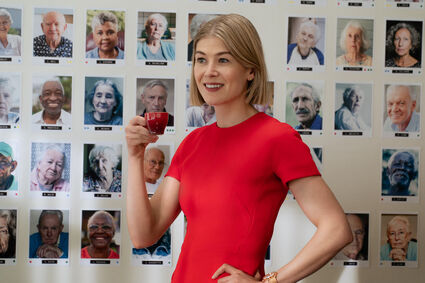 Rosamund Pike plays a new kind of villain in "I Care a Lot."

"I Care a Lot," a movie currently showing on Netflix, features a new type of villain, one who bilks seniors. She is very successful at this until she and her partner pick on the wrong target – an elderly woman with connections to a volatile gangster.

"'I Care a Lot' is about a woman named Marla Grayson (played by Academy Award nominee Rosamund Pike) who is a professional guardian," said the film's producer Teddy Schwarzman. "She is supposed to take care of the elderly, but instead she and her partner Fran (Eiza González) are running a scam to essentially lock them up, take over their finances and bleed them dry.

"Marla and Fran are constantly on the lookout for the perfect mark, and believe they find her in a woman named Jennifer Peterson (two-time Academy Award winner Dianne Wiest)," he continued. "They execute their scam seemingly to perfection, only to realize that things aren't as they seem - for Jennifer Peterson is not that sweet old lady. She's hiding something: a deep, dark past and a son named Roman (Golden Globe winner Peter Dinklage) who has some more than shady connections."

"It started when I saw news stories about real-life predatory guardians who game the system and exploit their wards – and I was horrified," explained J Blakeson, who wrote and directed the film. "Imagine opening your door one day and there is a person standing there holding a piece of paper that gives them total legal power over you. That idea terrified me and seemed very relevant right now. It plugged into themes that I am interested in exploring – themes about the power of authority, about people vs. profit, control vs. freedom, humanity vs. bureaucracy. It reminded me of Kafka's The Trial. I knew I had to explore it."

Blakeson also wanted to make a film about ambition, about the moral compromises people are willing to make to gain success and wealth.

"So I started playing with the idea of a story about an ambitious, tenacious guardian who is focused on success and money," he said. "She is focused on her own wants and desires. An entrepreneur who is following in the footsteps of the most successful people in our world right now, gaming the system and bending the rules, but technically staying within the law to get what she wants.

"And I wanted to explore this idea within a framework of a crime thriller because Marla sort of feels like a gangster to me," he continued. "She abuses the vulnerable for power and profit, but she is a legal gangster. So I wanted to counterpoint this idea by having Marla run into the path of a real gangster, who is on the other side of the law – someone just as ruthless and ambitious and amoral, someone who is exactly the wrong person to upset – and then see how far each of them would go to win."

Blakeson hopes the film will help bring more attention to the importance of caring for older generations.

"As a society, I think we tend to ignore and undervalue older people," he said. "Somehow we can't connect the dots from older people now to our own future being older – or maybe we don't want to. We see 'the elderly' as a problem to fix, or to move out of sight, forgetting they are all unique individuals who are still very much experiencing their own lives.

"As Marla says in the movie, 'Don't underestimate old people,' because all those people in care homes have all lived very different, often very interesting lives. But we forget that. And in a way the character of Jennifer is meant to speak to that – she seems like a stereotypical 'nice old lady' when we meet her, but we soon discover that she is just as surprising and morally complicated as Marla.

"I hope the film will bring to light the fact that we should all be more prepared for getting older," he added. "The elderly are prime targets for scams and exploitation. And we should all be vigilant and proactive in setting up protections – not just for the older people in our lives, but for ourselves too.

"Hopefully 'I Care a Lot' is a film that will get people talking afterwards – about the movie itself, but also about the questions it raises. I hope the audience will take away the feeling that exploiting people for money is a bad thing to do. I know that sounds like an obvious point to make, but it seems to me that people are being exploited for money everywhere right now in so many different ways – predatory guardians being just one example – and we do nothing about it. If it is not happening to us directly, we find it easy to ignore. But we shouldn't ignore it. And hopefully the film makes it a little harder to ignore."