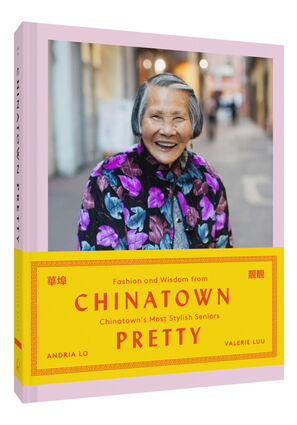 Chinatown Pretty, published by Chronicle Books, is more than the name of a new book featuring portraits and personal stories of trendsetting seniors in six Chinatowns across North America.

"Chinatown Pretty" is also what people call the distinctive fashion of pòh pohs (grandmothers) and gùng gungs (grandfathers). The style is a blend of modern and vintage, handmade and store-bought clothing.

The book's website, http://www.chinatownpretty.com, also provides a description of the style, "It's about layers of hand-knit sweaters and puffy coats in the summer, as well as bold floral patterns and baseball caps – sometimes all in one outfit. It combines urban utilitarianism with unexpected sartorial selections that makes the heart go a-flutter."

Andria and Valerie, who met when Valerie had a "pop-up" Vietnamese restaurant and Andria visited to do some freelance food photography, have been photographing and interviewing some of the most visually intriguing seniors in Chinatowns across North America for several years.

The subjects of the photos also took the time to share the insights and philosophy that helped many of them overcome the challenges of immigration, and the circumstances that inspired them to move to a new continent.

Many of those who live and work in North America's Chinatowns are not Chinese, but instead from Thailand, Vietnam and other countries in Asia. Many are part of families that spent time in South America or Mexico before settling in the U.S. or Canada. There are also a lot of Chinese-Americans who emigrated from Vietnam.

Valerie is a second-generation Vietnamese-American, and Andria is a second generation Chinese-American (via Boston) on her mother's side. Her father immigrated from Hong Kong.

Their book, Chinatown Pretty, which has been featured at Vogue.com and in the San Francisco Chronicle, as well as in special features on television news shows, is also a self-help book with examples of how to grow old with grace and humor and of course, style.

"The project started in 2014 in San Francisco's Chinatown," Valerie told The Good Life. "Andria and I would notice people wearing Nike's and the two-piece suits they got from Hong Kong.

In addition to San Francisco, the book's photos include those taken in Chinatowns in Oakland, Los Angeles, Chicago, New York and Vancouver.

Valerie and Andria made many of the connections outside of their native Bay Area through Chinese nonprofit organizations such as the Chinatown Community Development Center in San Francisco.

"They're focused on the neighborhood so it's not absorbed by the financial district and so it keeps the charm we all know and love," said Andria. "There are similar nonprofits in other communities that we would contact and get connections. We would also hit the streets and have magical moments."

What Andria describes as "magical moments" happened during the three hours a day they spent talking to people in the six Chinatowns. Most of the moments, however, weren't especially magical. Valerie reported that she and Andria had "a 90% rejection rate" when they stopped people to talk to them about the book.

"Asian culture tends to be private," she explained.

"The 10% that stopped to chat with us would ask us what drew us to them," said Valerie.

Most of the pictures in Chinatown Pretty are what Valerie called "street photos," but some of them were more carefully planned.

"Sometimes we coordinated 'senior photo days' where people would wear their outfits and talk more in depth," she said.

One gentleman was happy to show off his fashionable ensemble, taking special pride in the custom hand-sewn pockets. 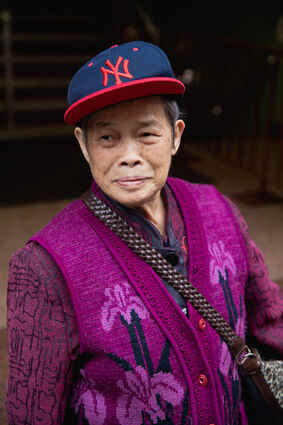 "He then lifted up his pantleg to show us his socks," said Andria.

"There was a gentleman in New York we approached as he sat on a bench," said Valerie. "He took special pride in the half-inch hem on his sleeves. He said he was a tailor."

He was glad that Andria and Valerie took the time to talk to someone of their grandparents' generation. He then shared a bit of cultural wisdom about getting older, "One day, the sun will set on you."

Andria and Valerie have not decided on their next project, but both are interested in doing things for their community, such as assisting seniors in getting their COVID-19 vaccines.

"I think people are looking for ways to give love to Chinatown," she said.