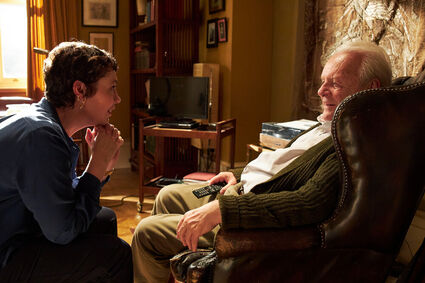 Olivia Colman as Anne, and Anthony Hopkins as Anthony in "The Father." (Photo by Sean Gleason. Courtesy of Sony Pictures Classics.)

It is an inescapable fact of life that for most relationships between a parent and a child, there is a moment in time where the child becomes a carer, and the parent a dependent.

This is at the core of "The Father," a beautifully wrought family drama that brings together Academy Award winners Anthony Hopkins (as Anthony) and Olivia Colman (as his daughter, Anne) in a heart-rending account of what happens when a relationship that has colored the characters' every waking moment for decades suddenly and irrevocably changes.

In "The Father," we experience the world through the prism of the character Anthony's confusion, as his dementia sets in motion a gradual decline affecting every part of his reality. But this is not just a film about dementia.

Anthony is at the center of a struggle that gives "The Father" elements of both thriller and horror – with Anthony's mind as the unremitting nemesis. In the words of the director, the audience should feel as if they are "groping their way through a labyrinth."

Despite such apparently dark subject matter, "The Father" is built on a foundation of human empathy, with moments of laughter and even a sense of joy. It celebrates the unbreakable bond between parent and child as they are locked together on a journey into the unknown.

In making his debut as film director with his own adaptation of his hit play, Zeller has taken to this new discipline with a calm manner and intriguing approach. Zeller wishes to play with a cinema audience in the way he enjoys manipulating a theatre audience.

"In a way it's like a thriller," said Zeller about the film. "It asks the audience to be part of the story by building a narrative, as I had done in the theater. I wanted the audience to feel closer to the characters. With Tony (Anthony Hopkins) as Anthony, we had an actor who has always had a powerful presence on screen.

"When I started working on the adaptation of my play, the face that came and came again to my mind was always Anthony Hopkins," said Zeller. "I had the profound conviction he would be so powerful and devastating in this part. He was at the beginning of my desire to make this film. This is the only reason for my decision to do it in English: it was a way to come to him. In that sense, he was part of my dream. That's why the main character's name is Anthony.

"But it was fascinating for me to watch him working with Olivia (Colman) who in my opinion is the greatest actress working at this time," Zeller added. "The story is about that moment when you become your parents' parent, and Anne, played by Olivia is at the heart of the narrative. She has to decide if she is going to lead her life or lead her father's life."

Co-writer Christopher Hampton's relationship with Anthony Hopkins stretched back almost 50 years to the early 1970s and a dramatization of "The Good Father." Zeller and Hampton flew to Los Angeles to discuss Hopkins playing the role of Anthony.

"We approached him and he agreed to do it almost immediately," said Hampton, "but then we had to wait patiently for his availability."

"I knew Christopher Hampton from having worked with him several times in the past," said Hopkins. "I knew that it was going to be a relatively small cast and crew. Everything was so compact. It felt almost as if we were working in a cottage industry.

"I was delighted to hear from Florian that the screenplay of 'The Father' had been written with me in mind. If that is the case, I feel very flattered and honored.

"Working on this film," Hopkins continued, "has concentrated my mind on my own mortality. In a way, I half-feel that I might avoid contracting dementia by making it.

"We had a lot of fun on set trying to memorize Florian's conversational style of dialogue. In some ways, by the time the cameras were on me, no acting was required.

"I'm eighty-two now and I've managed to survive past the age my father was when he died. I think I understood Anthony from the beginning - in a way it was like playing my father."

When questioned about his own age and possible retirement, Hopkin's response was typically strong: "I'd die if I ever gave up the business. I must be an old warrior! A survivor!"