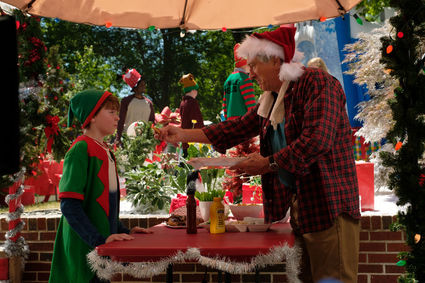 Robert De Niro (at right) in an apparently peaceful moment with his grandson in "The War with Grandpa."

There's an old expression that, "A man's home is his castle." That's exactly how sixth grade student Peter feels about his second-floor bedroom in his family's comfortable suburban home. It's a place where he can get away from his folks, his boy-crazy older sister and his Christmas-obsessed little sister.

Peter is pretty much an average kid. He loves gaming, hanging out with his friends and wearing his beloved pair of Air Jordans. But when his recently widowed grandfather Ed (De Niro) moves in with Peter's family, the boy is forced to give up his most prized possession of all – his bedroom.

Unwilling to let such an injustice stand, Peter, with the help of his closest buddies, devises a series of increasingly elaborate pranks to drive out the interloper.

Grandpa Ed has his own issues. A contractor before his retirement, Ed built the home where he lived happily for years with his wife, but since her death, the house has become a little bit more than he can manage on his own.

Even so, Ed was not willing to admit he needs help.

But after an incident involving a self-checkout machine at the market and a minor fender-bender, Ed's daughter Sally insists that her father renounce his stubborn ways and move in with her family full-time.

With only so much room in the house, Peter is told he must give up his sanctuary and move into the musty, dusty attic so that his room can go to Grandpa Ed. While Peter adores his grandfather, there are some sacrifices that are just too great.

So, amid the cobwebs of his attic lair, Peter resolves to take action. If Ed won't go nicely, Peter will just have to drive him out, one hilarious prank at a time. But as it happens, the boy might have misjudged his opponent, who proves to be quite the worthy adversary.

Grandpa Ed won't go without a fight. He even enlists his own pals - Jerry (Walken), Danny (Marin) and Diane (Seymour) - to join the battle. Soon, it's all-out war, with each side willing to stop at (almost) nothing to claim victory.

"Every kid can understand the dread of too much time with grandparents, let alone when they are coming and taking your room," said producer Marvin Peart. "A lot of families are dealing with consolidating their family. Someone passes, or gets too old to care for themselves, or both parents are working and need a babysitter that they can't really afford - it makes sense for the grandparents to come and live with them."

"You had to make sure, just like the book did, that both characters are very sympathetic," said co-screenwriter Matt Ember. "The boy is being displaced from his room, and any child would feel the classic child's lament of 'That's not fair.' And the grandfather is a widower, so built-in, you understand these people. And that matters. Even if they're being a little callous toward one another, you understand where both are coming from at all times."

One of the film's funniest scenes is an intense game of dodgeball between Peter and his friends, and Ed and his pals that takes place at a local Sky Zone Trampoline Park.

"It was terrifying," said Walken. "I had never been on a trampoline before. This dodgeball scene we are playing, the kids are much better than we are. And it's true - I am getting older. When I fall down, it's much harder to get up."

Although there are no easy answers to their dilemma, both Peter and Grandpa Ed learn a few things about healthy and productive conflict resolution.

"It's a comedy, so it is fun," said Oakes Fegley, who plays Peter. "But it has a moral behind it that you should respect your elders, and that you don't have all the time in the world with them so, you should have fun with them while you can."