A Theatrical Tribute to a Father with Alzheimer's 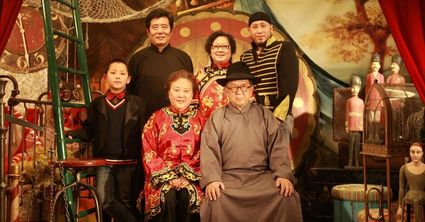 The Ma family, with Maleonn (Ma Liang) at top right

(Reprinted courtesy of the Alzheimer's Association.)

Yang Sun and S. Leo Chiang's moving documentary, "Our Time Machine," follows acclaimed Shanghai artist Maleonn as he stages a play for his father, who is battling Alzheimer's disease.

The play, "Papa's Time Machine," is a whimsical, autobiographical stage performance where two men representing Maleonn and his father, Ma Ke, attempt to go back in time to revisit the happiest moments of their lives.

"Our Time Machine" has played at over 70 film festivals worldwide, picking up 10 awards including Best Cinematography at the 2019 Tribeca Film Festival. It can be seen at http://www.amdoc.org/watch/ourtimemachine.

Maleonn, in the film, you say: "There comes a moment when we must grow up. We suddenly realize that 'forever' does not exist in this world." How do your words relate to your father's experience with Alzheimer's?

My father's disease - which has resulted in him losing his cherished memories - reminds me that everything in this world is fragile. Nothing lasts forever. I learned this not only from my father's dementia, but also from my own experiences.

Whenever I look back in my life, I'm not quite sure what is real and what is not. It's like re-drawing the contour of a faded sketch. I do it in order to refresh my memory, to remember what the original drawing looked like. But every time I do this, I change the drawing itself. After doing this again and again, the actual drawing - the memory itself - becomes something different. What I remember is no longer what took place. It's just something that I wished had happened.

I hope everyone knows one thing: Time takes everything away. You can't turn back the clock. We must cherish every moment we have now, today.

Throughout the documentary, you share stories your father has told you, ways he has influenced your imagination. How has he influenced you as a storyteller and as an artist?

Interestingly enough, my father and I rarely talk about creating art. We work in different fields. I create fine art, he directs Chinese opera. (Maleonn's parents were both part of the Beijing Opera before being sent to a labor camp during the 1970s Chinese Cultural Revolution. Maleonn was born in 1972.)

And yet there's an old Chinese saying that comes to mind: "Teach with your words, and with your actions," meaning that teaching by example is more effective than by lecturing.

I worshiped my father when I was little. I hung on his every word, observed his thought process, learned how he coped with frustration, was awed by his passion. Everything I observed in him influenced me. I think every little boy wants to become like his father.

In the documentary, we see your father struggle to finish writing a book about his life as an opera director. When did you first see signs of dementia in your father?

Six years ago, I visited my parents on their vacation in Southern China. There was a swimming pool that was empty at night, so I always swam there in the middle of the night.

As I swam, I saw my father at the poolside. He wanted to make sure that I was safe, so he came down to check on me. He asked, "Do you know how to float on water without moving your body, and not sink?" "Yes, I do," I replied, "You taught me this when I was little." He was satisfied, "That's good. You won't drown, then. If you feel tired, you can float in the water for a while." I nodded and continued swimming.

Five minutes later, when I came back to my father, he asked the same question again, "Do you know how to float?" I thought he was joking, so I showed him. He said again, "That's good. Then you will be safe."

Several minutes later, he asked the same question again. I realized that something was wrong with his memory, because he was not making a joke. He just couldn't remember that he had asked me before.

That night, I remember floating in the water, filled with sadness. I knew that my father had Alzheimer's, the same illness that had affected my grandfather. I knew that one day, maybe one day soon, my father was going to be leaving me.

If a time machine could take you back to a favorite memory with your father, what moment would it be?

My father was always too busy to hang out with me when I was a child, too focused on his work after suffering greatly during the Cultural Revolution, a time when he was unable to create art.

When I was 14 years old, the two of us took a bike ride outside of the city. This was the first time I can remember him spending one-on-one time with me. That day felt very different. It's like my father suddenly realized that I was growing up and becoming a man. We took a long ride, even exploring a remote forest.

That particular day felt amazing. It was as if I became older and bigger on that single day during that bike ride. I was no longer just my father's son; he had accepted me as his friend.

Your dad's hospital visits in the documentary result in him being unable to draw a clock set to the correct time, and not knowing the day of the week or even the year. Was this an eye-opening experience for you?

It is so hard for me to watch. I wasn't with him for all of his hospital visits, but the camera captured those moments for the documentary. When I watched the film for the first time, I cried. I know that these visits - where my father couldn't tell time, couldn't remember simple details - had been happening for a while. This knowledge is the source of a lot of pain for me.

My dad's memory used to be so great that he could even recite Shi Ji, the ancient Chinese book of historical records. That was an impossible accomplishment. He was able to recite long passages well into his fifties.

But that didn't matter. Dementia still caught up with him. The disease has taken his superpower away. There were moments of great panic for him. At a low point, he said, "I don't remember anything now. Am I becoming a fool?" I tried to comfort him, knowing that it was irreversible. He knew it too. I could sense his fear. When your memory fogs over, covering up everything, anyone would be frightened. I tried to be there for him the only ways I knew how.

In the film, your mother expresses the stress of caregiving. What has this experience been like for your mom?

My mother is strong, resilient and open-minded. She is an incredible woman.

After my father was diagnosed with Alzheimer's, she showed her courage and wisdom by making critical decisions, including deciding that they should move to a nursing home to be with old friends. They have lots of activities to keep their lives full and enriched, plus the necessary medical care and attention.

This year, my father took a fall and hurt his legs, so he isn't able to walk much anymore. But before that, and before COVID-19, my mother constantly took my father on trips. They've been all over! They never worried about the inconvenience of traveling.

I am sure their active social life and those trips have helped my father live meaningfully with Alzheimer's disease. It has also lessened the pressure on my mother as his primary caregiver.

Tell us about the importance of art and music in the lives of people living with dementia.

My father learned Chinese opera as a child. We brought him DVDs of Chinese opera performances, and now he spends a lot of time watching these shows. I'd like to think that these videos bring back some bits of his happy memories training for the opera as a young child. When he watches them, he is always very peaceful. It seems to soothe him.

As an artist with a father living with Alzheimer's, I can see that music and art offer comfort, and seem to ease the person's anxiety or restlessness.

The film opens with a sonogram of a baby and the words: "Dear Child, How should I introduce you to this beautiful world?" Your baby was born a year after finishing this project. As the circle of life continues, what lessons from your father will you teach your daughter?

I've been thinking a lot about the journey of life recently. My daughter is now a toddler stumbling around. We lead her by the hand, but I know one day she will want us to let go, so she can go on her own journey. 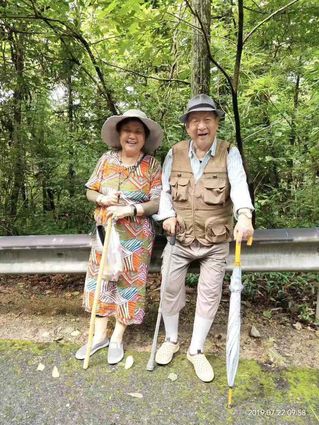 We are walking alongside our parents now, but they are walking slower and slower. One day, they will have to stop. They will not keep up with us, but the memories of our walk together will always be with me.

While I walk with my child, I'd like to pass these gifts to her. This is why we are on this journey. By understanding this, the process of aging, illness and even death do not seem as scary any more.