"I'm too old for Snapchat, but too young for Life Alert."

Age seems to be on Joan Lunden's mind a lot these days. The journalist, author, motivational speaker, spokesperson, health-and-wellness advocate and mother of seven, who hosted "Good Morning America" for almost 20 years, recently turned her attention to writing about how life changes for women as they become senior citizens.

Her new book, Why Did I Come into this Room? A Candid Conversation about Aging, is a revealing and yet funny look at what it means to get older. She talks about age spots (insisting they are sun spots), expanding waistlines, diminished energy and even changes in sex drive.

The Good Life asked Lunden, who will celebrate a milestone birthday in September, how old she actually feels.

Lunden's "bucket list" includes things that are probably not on the list of many of her contemporaries, including climbing Mount Kilimanjaro in Tanzania – and that's just for starters.

"I want to do Machu Picchu," she said. "I'm an adventurer at heart. My mother said I get it from my father who was big on adventure and became a surgeon. I always thought I would follow in his footsteps – but not the surgeon part."

Instead, Lunden studied psychology. She found her way into broadcasting, becoming the longest-running female host ever on a nationally televised morning show, reporting from 26 countries, covering five presidents, five Olympics and issues important to her and her viewers, including health.

Lunden continued pursuing her interest in health issues, which she looks at as a way to continue her father's legacy. When she left "Good Morning America," she bought a laptop and started "Joan Lunden Healthy Living."

"All the projects since I've left GMA have been oriented to health and women's wellness," said Lunden, who is also a breast cancer survivor.

"Breast cancer really changed the trajectory of my life," she said. "That's the day I actually got passed the baton from my dad."

In typical Joan Lunden style, she learned all she could about breast cancer. She took notes. She even took a camera. She did interviews about her triple negative breast cancer. She appeared bald but smiling on the cover of People Magazine.

With each life experience, Lunden has more to write about and more to talk to audiences about. She is also becoming more open about things. Her latest book has been described as being her most candid book.

Lunden was asked why people become more open about things as they get older.

"With age comes wisdom," she said. "I think it's true. You reach a point where you can exhale and you're not trying to impress other people anymore. You become more comfortable in your skin.

"You look back and say 'Wow! I really made it through a lot of challenges,'" she added.

When she wrote Why Did I Come into this Room?, Lunden wanted to focus on what was actually happening to women.

"They become forgetful and they get an expanding waistline," she said. "I wanted to put it all out there. This stuff happens to all women because we have estrogen in us. If it's not talked about, as a woman, you feel 'there is something wrong with me.'

"I just wanted to put it out there as a conversation starter," she said. "If you really want to connect with a reader, be candid."

And filling a book with facts and humor helps also.

"The more research I do, the more passionate I get," said Lunden. "And I've certainly never been as funny in my other books. My husband would say, 'You're not going to say that, are you?' That would make me decide to include it."

Lunden was asked why most humorous, but informative, books about aging seem to be written by women.

"Men are allowed to get old and age," replied Lunden. "Women in our society aren't allowed to do that. We lose jobs. We lose appeal.

"It's difficult when you start experiencing all the things that aging brings about to your body," she said. "You're not so appealing. You're not so sexy. So that goes to 'I'm not relevant.' They close opportunities in life. That's a bad road to go down.

"These are just normal things. It doesn't have to mean you're getting old."

People live longer these days because a lot of people have a more active life than their parents did at the same age. Lunden noted that 20 years ago you would never see a 60-year-old woman exercising in a gym.

"We are a very different generation," she explained. "We're still out playing tennis and doing pilates. I'm climbing mountains."

At the time of this interview, Lunden was planning a trip to Maine to see friends and go with them to "a real buttkicking exercise class and hike."

Lunden learned a lot about the aging process as she did the research for her book. She now has a better understanding of what estrogen does for women, and more importantly what it's absence does.

"When the body realizes there is no more estrogen, the fat cells go to your abdomen," she said. "Waist circumference is the best indicator of diabetes and heart rate."

Lunden, who never remebered having a doctor measure her waist, suggests to her readers that they buy a soft measuring tape and talk to their doctors about the result.

"If I can motivate women to do that and take action, what more can you ask for?" she said. "I didn't go to a doctor and talk about my expanded waitsline. That was a huge misconception of mine."

Lunden has been getting a good response from readers of her new book. One commented, "Thank God we're finally talking about this."

Another said, "I'm so happy that somebody is finally talking about things that are happening to all us women."

"My biggest challenge going forward is what to say no to," said Lunden. "When you are so much in the public eye, you get asked to do everything."

Lunden, who is currently seen on commercials as the spokesperson for A Place for Mom, gets asked to do a variety of televsion shows, public appearances and charity work. She was even asked to do "Dancing with the Stars."

"I've lived the good life," she said. "Ask my husband to take a play out of the Joan Lunden playbook and he will say, 'Just say yes and then figure out how to do it.'" 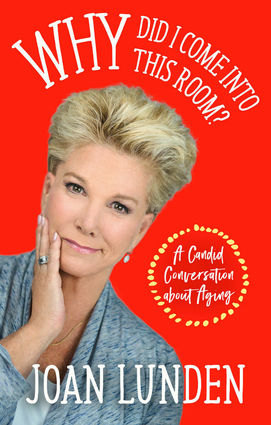 Lunden plans to start a new career in education this fall as an adjunct professor at Lehigh University's College of Health. She has been busy lately designing her course, which will cover the effects of the dissemination of information on public health.

She is also currently considering the subject of her next book, which may again be about aging.

"I pretty much write for my age category – 45 to whatever," she said. "I know they want to be educated but they also want to be entertained."

"I don't plan on retiring anytime soon," she said, "but when I retire, I will travel and climb mountains – maybe do some golfing."