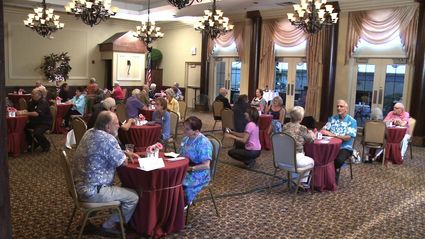 Thirty seniors participated in the speed dating event for people between 70 and 90.

"The Age of Love" was inspired by a conversation filmmaker Steven Loring had at his mother's kitchen table in 2011. At the time, his 71-year-old newly widowed mother was trying to adjust to the changes in her life.

"Who's ever going to hug me again for the rest of my life, or hold me, or touch me?" she asked. "Now I'm just another old lady in the world, alone."

Loring's response took almost four years – the making of the documentary "The Age of Love," which premiered in 2015. The film follows a group of seniors before, during and after a speed dating session in Rochester, New York.

Actually, Loring's response has become more than just the film.

"To me, it is more of a movement," he said. "The movie continues to draw a lot of interest. We had 100 screenings last year. Two hundred communities have signed on to do speed dating."

"The Age of Love" is available for screenings at http://www.theageof lovemovie.com. The website also offers a speed dating kit created for senior homes, senior centers and organizations interested in hosting a speed dating session for seniors.

So far, more than 200 communities have used the kit to host sessions.

"I know of three weddings and numerous friendships," said Loring about the results of the speed dating sessions inspired by the movie.

"The Age of Love" has been shown to sociology and nursing students at colleges.

"Those who teach young people about aging are seeing it as a resource," said Loring. "Young people find it illuminating to see someone 80 have the same hopes and insecurities they do.

"I really see it as being about the endurance of love and that older people are not beyond it," he said.

Making 'The Age of Love'

"Making a documentary is expensive and time-consuming," said Loring. "It's not the most rewarding job in the world. You have to believe there's a story on the other side."

Loring believes that most of the seniors who signed up for the speed dating session did it "on a whim" and "they probably didn't tell their children about it."

Fifteen men and 15 women signed up for the speed dating session and then Loring's work became challenging.

"I had to get signed releases from all of them," he said, which required him to convince a few of the participants that he was "not trying to embarrass anyone."

He was surprised by the response he received from one woman as he was making his case.

"At some point, she stopped me and said, 'I'm invisible in the world. Why wouldn't I want to share what I have to say?'"

"Before we shoot, can you look through my closet and tell me what I should wear?" asked one of the women.

"We're seeing that the 18-year-old was still alive in all of these people," Loring noted.

Three weeks before the speed dating event, Loring took his camera and tripod to visit and talk to the participants.

"I'm not going to ask questions," Loring told each of them. "I just want to hear what you have to say. I wanted all of them to speak from their hearts."

"It became a friendship in a way," he said. "There was instant chemistry."

The result of the filming was 168 hours of tape, which took more than a year to edit.

At the risk of spoiling the movie, I had to ask Loring what happened to the people it introduced me to.

"Nobody who was in the film ended up in a marriage, but there were 48 dates from the matches," he said. "Everyone who picked someone on their scorecard ended up with some dates. One guy ended up with nine."

The main benefit for the participants was that most of them realized that the potential to meet someone exists inside of them, according to Loring.

"They wanted me to know what we did led them to find something meaningful," he said. "It was less about coming to meet someone and more about still 'being in the game.' Everyone felt empowered."

One participant told Loring at the movie's premier, "Now I talk to women in the grocery store."

An underlying question in "The Age of Love" is whether the experience of love changes over a lifetime. Loring responded with what one speed dating participant told him.

"When he was young, he always put on a show. He never admitted to feeling vulnerable. Now that he's in his 70s, the expression of love is much deeper. 'Now we're able to express our vulnerabilities,' he told me. 'We share things more openly and honestly. We show our fears and vulnerabilities and understand we're not alone. Love becomes more meaningful.'"