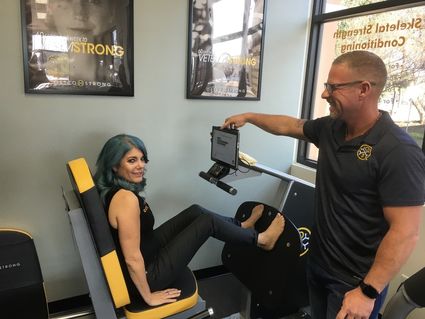 Angela and Eddie Patterson, owners of the new OsteoStrong location in Visalia, as well as the one in Porterville, demonstrate the Lower Growth Trigger machine.

"It's not a gym," said Angela Patterson about OsteoStrong, the business she and her husband, Eddie, recently opened in Visalia. They are also the owners of an OsteoStrong location in Porterville.

"People can come in in day clothes," she explained. "There's no sweating. It's pain-free."

"It's basically a 12-minute-a-week program," said Eddie, offering an estimate based on two minutes on each machine.

He is enthusiastic about the benefits of OsteoStrong for seniors. "We're reversing the aging process," he said.

"At the age of 30, all people stop growing bone," he said. "They start losing bone density."

The loss of bone density, which is about 1% a year, but 2% a year for women after menopause, puts people at an increased risk of bone fracture. Women tend to be in bed longer after a fracture and as a result, their body has a longer period of deconditioning.

Conditioning includes having healthy bones, which has been a challenge for seniors. There's a formula that shows the amount of weight necessary to trigger bone growth in lower extremities is 4.2 times a person's body weight.

This means that triggering bone growth requires a woman who weighs 100 lbs. to lift 400 lbs.

"That's pretty impossible," said Eddie. "She'll never be able to accomplish that in a gym."

He explained that the machines at OsteoStrong "emulate the force (of 400 lbs.) on her body without the stress on her joints."

Bone density has an impact on the strength of a person's muscles.

"Your muscles will only get as strong as your bones will allow," said Angela.

In addition to helping seniors, clients at OsteoStrong's locations throughout California and across the U.S. include professional members of the Golden State Warriors, as well as 12-year-old soccer players.

Professional athletes come to OsteoStrong to lessen the chances they will break a bone. Preteen athletes, "will have denser bones and stronger muscles at a young age," said Eddie. "A kid will have less of a chance to break a bone."

"We work on fracture prevention," said Angela. "We also work on balance, such as if they have a problem getting out of chairs. We 'rewire' the brain and muscles to work together. We've had people not use their canes or their walkers anymore."

Eddie and Angela use a vibrating floor machine to help this process.

"It wakes up all your muscle fibers," said Angela.

Meanwhile, the Lower Growth Trigger puts stress on bones by fatiguing the muscles. Unlike gym equipment, there are no repetitions. You push on it until your muscles shake.

"But it's not," said Eddie. "It's more like a wheel barrow. You hold on and maintain good posture."

"We are very strict about your posture," said Angela. "We make sure everyone is symmetrical."

For more information, including about when the next demonstration is scheduled, call (559) 782-1570 or visit http://www.osteostrongvisalia.me.