Patriot Guard Riders were founded in July 2005 with the original purpose of shielding the families of fallen veterans from those who sought to disrupt the funerals of their loved ones.

At the time, the Westboro Baptist Church was making headlines by conducting loud protests at the services of veterans and others.

Carol Houck, the wife of an American Legion Rider, met with members of the Kansas American Legion Riders in Mulvane, Kansas to respond to the Westboro protestors and preserve the memory and honor of fallen veterans, and to emotionally support their families during a difficult time.

Since then, Patriot Guard Riders have grown to include thousands of members, with riders in all 50 states. Their mission has expanded to include honoring first responders, as well as establishing a Help On The Homefront (HOTH) program, to provide assistance to veterans and their families.

"As for requirements, anyone and everyone can join and stand with us," states the Patriot Guard Riders' website, http://www.patriotguard.org. "You don't need to be a veteran, and you don't need to ride a bike. All you need is respect for our military, veterans, and first responders; and desire to show that respect to them and their families."

Locally, David Crawford, who joined the U.S. Army in 1969, serves as assistant ride captain for Tulare County. He has been in a Patriot Guard Rider for about seven years, ever since he inquired about the group's patch worn by a veteran at a Veterans Day parade.

"We're not 'members,'" he said in response to a question. "There are no monthly meetings and no dues."

Instead, he explained, local ride captains set up their missions, which usually include riding to a mortuary or cemetery and setting up flags to honor a fallen veteran. Mission notifications are sent to all riders in the area, as well as posted on the website in response to requests from families.

"Most of the time, the families hear about us by word of mouth," said Crawford.

Crawford estimates that there are about 3,000 Patriot Guard Riders in California. Since many funerals are conducted during the workweek, many riders are seniors.

"We have quite a few elderly," said Crawford, but he noted that some members bring their teenage children on their missions.

The number of missions varies from month to month. Crawford may go on two or three missions a month, but sometimes much more.

"People don't die off on a regular basis," he said.

Despite often attending funerals for veterans, Crawford still gets emotional at the funeral services.

"I cry pretty much every time they play 'Taps,'" he said, adding that there were were a few especially dramatic moments at services attended by the Patriot Guard Riders, including one at the funeral for a local veteran that was conducted at the Bakersfield National Cemetery in Arvin.

"He was there at the beginning of Vietnam," Crawford recalled. "He was a helicopter pilot transporting Marines to the beach. He later started his own helicopter business in Lemoore, crop dusting. A helicopter pilot is who he was.

"We rode over to Lemoore and met up with some Kings Country riders," he continued. "A group from Tehachapi met us in Arvin. We had about 30 (riders) at the funeral. 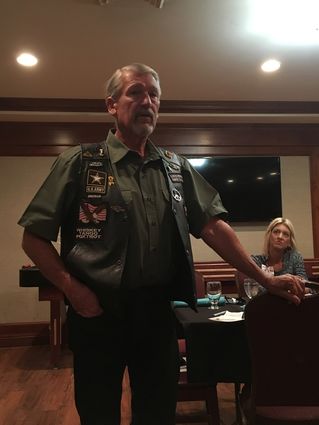 Assistant Ride Captain for Tulare County David Crawford talks about the Patriot Guard Riders at a meeting of the Senior Coalition.

"Suddenly, a Huey helicopter came up over the mountains south of us and went over our heads. Everyone came to a stop. That was a real tear-jerker. Afterwards, we went to the widow to say goodbye and she asked if we arranged that. I said, 'No, God did.'"

Crawford also recalled the time a group of Patriot Guard Riders escorted the casket of a veteran from Madera to Ontario in Southern California. The group was riding south on Highway 99 when an eagle swooped down over them.

For more information about Patriot Guard Riders, which describes itself as "a 100% volunteer group whose mission is to ensure dignity and respect at memorial services honoring veterans, fallen military heroes and first responders," visit http://www.patriotguard.org.

For local information, including how to get involved in missions in the greater Tulare and Kings County area, contact Assistant Ride Captain David Crawford at (559) 303-6187 or dwcrawford@sbcglobal.net.