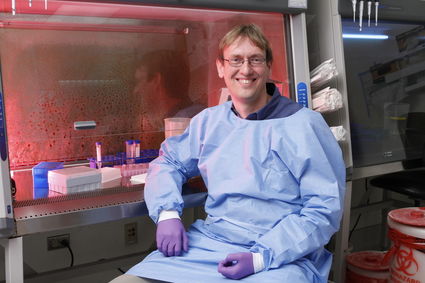 Jan Carette is a senior author of a paper describing how he and his colleagues found a way to stop a broad range of enteroviruses, including rhinoviruses, from replicating inside human cells in culture, as well as in mice.

Temporarily disabling a single protein inside our cells might be able to protect us from the common cold and other viral diseases, according to a study led by researchers at Stanford University and University of California San Francisco.

The findings were made in human cell cultures and in mice.

"Our grandmas have always been asking us, 'If you're so smart, why haven't you come up with a cure for the common cold?'"said Jan Carette, Ph.D., associate professor of microbiology and immunology. "Now we have a new way to do that."

The approach of targeting proteins in our own cells also worked to stop viruses associated with asthma, encephalitis and polio.

Colds, or noninfluenza-related upper respiratory infections, are for the most part a weeklong nuisance. They're also the world's most common infectious illness, costing the United States economy an estimated $40 billion a year. At least half of all colds are the result of rhinovirus infections.

There are roughly 160 known types of rhinovirus, which helps to explain why getting a cold doesn't stop you from getting another one a month later. Making matters worse, rhinoviruses are highly mutation-prone and, as a result, quick to develop drug resistance, as well as to evade the immune surveillance brought about by previous exposure or a vaccine.

In a study published online Sept. 16 in Nature Microbiology, Carette and his associates found a way to stop a broad range of enteroviruses, including rhinoviruses, from replicating inside human cells in culture, as well as in mice. They accomplished this feat by disabling a protein in mammalian cells that all enteroviruses appear to need in order to replicate.

One of the most well-known and feared enteroviruses is poliovirus. Until the advent of an effective vaccine in the 1950s, the virus spelled paralysis and death for many thousands of children each year in the United States alone. Since 2014, another type of enterovirus, EV-D68, has been implicated in puzzling biennialbursts of a poliolike disease, acute flaccid myelitis, in the United States and Europe. Other enteroviruses can cause encephalitis and myocarditis - inflammation of the brain and the heart, respectively.

Like all viruses, enteroviruses travel lightly. To replicate, they take advantage of proteins in the cells they infect.

To see what proteins in human cells are crucial to enteroviral fecundity, the investigators used a genomewide screen developed in Carette's lab. They generated a cultured line of human cells that enteroviruses could infect. The researchers then used gene editing to randomly disable a single gene in each of the cells. The resulting culture contained cells lacking one or another of every gene in our genome.

The scientists infected the culture with RV-C15, a rhinovirus known to exacerbate asthma in children, and then with EV-C68, implicated in acute flaccid myelitis. In each case, some cells managed to survive infection and spawn colonies. The scientists were able to determine which gene in each surviving colony had been knocked out of commission.

While both RV-C15 and EV-D68 are both enteroviruses, they're taxonomically distinct and require different host-cell proteins to execute their replication strategies. So, most of the human genes encoding the proteins each viral type needed to thrive were different, too. But there were only a handful of individual genes whose absence stifled both types' ability to get inside cells, replicate, bust out of their cellular hotel rooms and invade new cells.

One of these genes in particular stood out. This gene encodes an enzyme called SETD3.

"It was clearly essential to viral success, but not much was known about it," Carette said.

The scientists generated a culture of human cells lacking SETD3 and tried infecting them with several different kinds of enterovirus - EV-D68, poliovirus, three different types of rhinovirus and two varieties of coxsackievirus, which can cause myocarditis. None of these viruses could replicate in the SETD3-deficient cells, although all proved capable of pillaging cells whose SETD3-producing capability was restored.

The researchers observed a 1,000-fold reduction in a measure of viral replication inside human cells lacking SETD3, compared with controls. Knocking out SETD3 function in human bronchial epithelial cells infected with various rhinoviruses or with EV-D68 cut replication about 100-fold.

Mice bioengineered to completely lack SETD3 grew to apparently healthy adulthood and were fertile, yet they were impervious to infection by two distinct enteroviruses that can cause paralytic and fatal encephalitis, even when these viruses were injected directly into the mice's brains soon after they were newly born.

"In contrast to normal mice, the SETD3-deficient mice were completely unaffected by the virus," Carette said. "It was the virus that was dead in the water, not the mouse."

Enteroviruses, the scientists learned, have no use for the section of SETD3 that cells employ for routine enzymatic activity. Instead, enteroviruses cart around a protein whose interaction with a different part of the SETD3 molecule, in some as yet unknown way, is necessary for their replication.

"This gives us hope that we can develop a drug with broad antiviral activity against not only the common cold but maybe all enteroviruses, without even disturbing SETD3's regular function in our cells," Carette said.

Researchers at the Chan Zuckerberg Biohub and the VA Palo Alto Health Care System contributed to the work.Stanford's departments of Microbiology and Immunology and of Biology also supported the work.