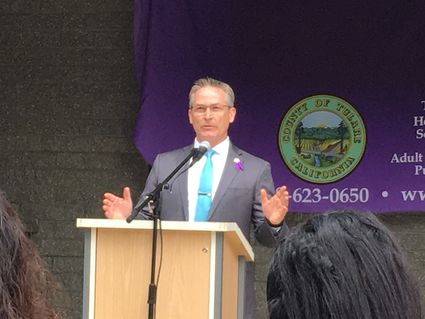 Tulare County Sheriff Mike Boudreaux explains how his grandmother was a victim of elder abuse.

Tulare County's annual ceremony to mark Elder Abuse Awareness Month was held at Government Plaza in Visalia on May 28. The event was attended by about 50 people. 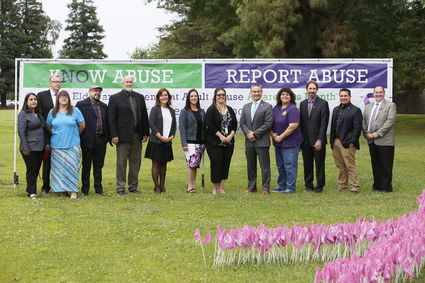 "This event is to build awareness in the community about elder abuse," said Deputy HHSA Director of Adult Protective Services John Mauro, who noted, "One in every 10 people over 60 experiences some form of elder abuse."

"The whole concept of elder abuse has been very personal to me this year," said Tulare County Assistant District Attorney Robert Dempsie, who talked about "a very close relative... who fell prey to the 'grandma scam' on the telephone," and sent $1,600 to the scammer.

"When she started to talk about it, the tears would flow," he said.

A tall and stocky 65-year-old man told the gathering about how he became a victim of elder abuse, often beaten by the manipulative woman in their co-dependent relationship. He then praised the services available from the county.

"The end result was that they helped me and got me healthy again," he said. "I have to commend all the county agencies."

Tulare County Sheriff Mike Boudreaux said his grandmother was a victim of elder abuse who was beaten and overmedicated.

"She was addicted to prescription drugs because of her caretaker," he said. "It brings tears to my eyes if I think about it."