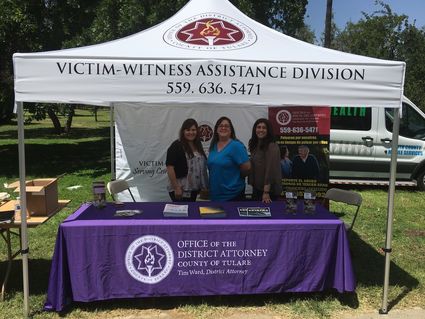 The Tulare County Elder Abuse Task Force at the recent Senior Day in the Park where they distributed information to local seniors and their families.

Two years ago, the Tulare County District Attorney's Office received grant funding in the amount of $400,000 for a new Elder Abuse Program.

"This was a highly competitive statewide grant and we were one of the few jurisdictions awarded it – and I believe we have been good stewards of it," said Tulare County District Attorney Tim Ward. "The grant has really given us the means to chart a new course when addressing elder abuse by being proactive. Our ability to educate seniors, caregivers and community stakeholders with outreach awareness as a preventative measure has been tremendous. Our team has done a great job in the community."

The first goal of the two-year funding from the California Governor's Office of Emergency Services was to enable the county to hire victim witness workers.

"The grant allows for two full-time employees to get in their cars and go throughout Tulare County," Chief Deputy District Attorney Dan Underwood told The Good Life two years ago about the new staff members who would be following up on reports of elder abuse.

The money was also intended to cover training and operational expenses, in addition to raising awareness in the community about the problem.

"That's the goal, to educate the community on what constitutes elder abuse," said Underwood.

So what has the grant money allowed the county to do?

Last year, Elder Abuse Victim Advocates hosted 26 public presentations throughout Tulare County explaining to seniors and those who work with them how to identify and report elder abuse, as well as how to identify and avoid cons, scams and frauds that particularly target seniors in the community.

Grant money was used to spread information about elder abuse.

"Grant monies allowed TCDA to hire a trilingual South County Elder Abuse Victim Advocate that serves our south county areas and is stationed at the Porterville D.A.'s office," she said. "Additionally, we are able to hire a part-time extra help advocate to assist with outreach and case management, serving all parts of Tulare County."

"In the early months of our XE (California Elder Abuse) Grant award, we realized that as a victim service provider, it would be helpful to measure what our community and collaborative partners identified as gaps in services that elder and dependent adult victims are experiencing," said Burnham. "We polled over 100 professionals in Tulare County including law enforcement, hospital social workers, Adult Protective Service workers, public guardians, prosecutors, and civil and family law attorneys, and the outcomes were published in The Tulare County Elder Justice Report.

"The needs assessment identified several issues that face elder and dependent adult victims of crime," she continued. "It reinforced what many already suspected, that there was a great shortage of affordable senior housing and affordable housing for dependent adults who are not yet old enough to qualify for senior housing. It highlighted the need for emergency shelter beds for victims of abuse in later life. Additionally, we found that many elders do not have access to reliable affordable transportation. Needs for more enhanced services for victims were also identified. We used this data to determine, what could we do to bridge some of these gaps with the assistance from the XE Grant funds."

As a result of the report, TCDA purchased city transit tickets in every city of Tulare County, including rural transit TCAT passes, to be provided free to elder and dependent adult abuse victims who need transportation for crime-related services such as counseling and medical treatment after a crime.

Earlier this year, the program received a one-year extension of its two-year grant. When the funding runs out in June 2020, grant money will again be sought to continue this program.