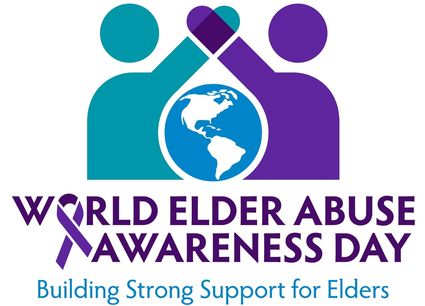 "Each report of elder abuse will be recognized with a purple flag being placed on the front lawn of Government Plaza with the hope of bringing awareness of elder abuse and the need for increased prevention," explained Tammie Weyker-Adkins, Tulare County Health & Human Services Agency public information officer. "Elder and dependent adult abuse can involve neglect, self-neglect and physical, emotional, sexual or financial abuse," she added. "It affects seniors across all cultures, races, and socioeconomic groups. Each year, older adults lose billions of dollars in telemarketing fraud, mail scams and fake lotto schemes."

"Here in California, Adult Protective Services receives more than 191,238 reports of elder and dependent adult abuse per year, and reports are increasing. It is estimated that only one in 24 cases is reported, and for financial abuse, only one in 44 cases is reported," noted John Mauro, L.C.S.W., deputy director for Adult Services at the Tulare County Health & Human Services Agency. "But together we can make a difference and help take care of those who have taken care of us. Through education, recognition and reporting, we can improve the lives of elders and dependent adults in our community."

"In 2018, our office reached thousands of seniors, their families, and service providers throughout the county with education on financial and physical abuse, and we'll continue those excellent outreach efforts with community partners this year," said Tulare County District Attorney Tim Ward. "Last year, this office filed over 50 cases of criminal elder abuse. If you see or suspect elder abuse, report it to law enforcement or social services. We must never lose sight of the most vulnerable victims among us and fight to protect their rights."

World Elder Abuse Awareness Day (WEAAD), which was later expanded to World Elder Abuse Awareness Month, was launched on June 15, 2006 by the International Network for the Prevention of Elder Abuse and the World Health Organization at the United Nations. Its purpose is to provide an opportunity for communities around the world to promote a better understanding of abuse and neglect of older persons by raising awareness of the cultural, social, economic and demographic processes affecting elder abuse and neglect.

In addition, WEAAD is in support of the United Nations International Plan of Action acknowledging the significance of elder abuse as a public health and human rights issue. WEAAD serves as a call-to-action for individuals, organizations and communities to raise awareness about elder abuse, neglect and exploitation.

Each year, an estimated five million older persons in the United States are abused, neglected and exploited. In addition, elders throughout the country lose an estimated $2.6 billion annually due to elder financial abuse and exploitation, funds that could have been used to pay for basic needs such as housing, food and medical care.

Training sessions will be conducted throughout Tulare County in June to help people recognize and resolve cases of elder abuse. The following sessions are all free to attend, and all will begin at 11 a.m.: