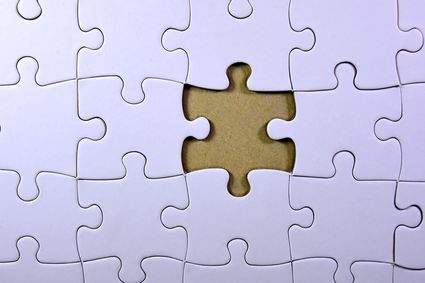 (BPT) - Just try to walk by an unfinished jigsaw puzzle without stopping. It's almost impossible. In fact, nearly half of all Americans puzzle for fun, to relax or to relieve stress.

Families puzzle together as a tradition. Millennials puzzle to connect with each other and disconnect from a hyper-digital lifestyle, while seniors puzzle for a brain boost. It may feel like puzzling is one of many retro activities in vogue again, but it has always been in fashion.

Here are some fun facts you might not know about the always- fashionable hobby:

1. Puzzles in ancient times. Puzzling has been around since the dawn of time (almost). Greek mathematician Archimedes puzzled around 250 B.C. to solve geometry problems. He cut a square into 14 pieces, then examined how many different configurations could be made from those pieces. This puzzle was recently solved by Bill Cutler, a mathematician from Cornell University, who showed the puzzle has 536 truly distinct solutions.

2. The first jigsaw puzzle. Engraver and mapmaker John Spilsbury is credited with inventing the first jigsaw puzzle in 1767. He drew a map on top of a piece of wood, then used a jigsaw to cut it into small pieces. The name clearly stuck! Kids today still learn geography by using jigsaw puzzles of maps. In fact, the "Geographical Puzzle" was the first wooden puzzle produced in 1891 by the puzzle maker Ravensburger.

3. A puzzling craze sweeps the nation. Puzzles for adults became popular around 1900, and by 1908 puzzles were a staple of the upper class. Why upper class? Wooden puzzles were expensive, typically costing $5 each (or $140 today). For working people, who earned an average of $50 per month, puzzles would have been a luxury. Over time, cardboard puzzles became a less expensive option, making puzzling available to everyone.

4. A welcome escape. During the Great Depression, puzzles offered people a quiet, inexpensive escape from the troubled economy. In 1932, a new concept emerged: a weekly puzzle. The "Jig of the Week" was sold at newsstands every Wednesday. In February 1933, puzzle production reached an all-time high of 10 million puzzles per week.

5. Puzzles grew. Literally. In 1977, Ravensburger debuted the world's largest puzzle for its time, with 5,000 pieces. Today, the world's largest Disney puzzle, "Memorable Disney Moments," clocks in at 40,320 pieces. It took the puzzle creators 650 hours to trace each of the 10 scenes by hand to be digitally rendered on the computer and another 400 hours to bend the steel sheets with a hammer to create the cutting tool.

6. Puzzling today. As far back as we can trace, puzzling has been equal parts art and craft, driven by puzzlers who race to place the last piece and solve the puzzle. And today, there are even new game-like Escape Puzzles that combine puzzling with escape-the-room mystery. Puzzling is more than ever a respite from today's hectic lifestyle to relax and connect with one another over a shared goal.