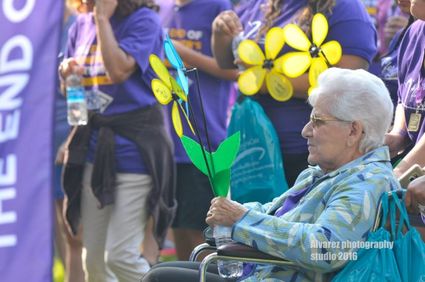 Many of the participants at the Walk to End Alzheimer's are there to help or remember a loved one with the disease.

Walkers, team captains, sponsors and volunteers are needed for the 2107 Visalia Walk to End Alzheimer's, which will be held on Saturday October 14, at Mooney Grove Park, beginning at 8 a.m.

The Walk to End Alzheimer's is the nation's largest event to raise awareness and funds for Alzheimer's care, support and research. Held annually, this inspiring event calls on participants of all ages to help in the effort to defeat this devastating disease.

Last year, the Northern California and Northern Nevada chapter drew more than 23,000 participants to its walk locations, which included Visalia. The chapter has raised more than $5.1 million to advance the mission of the Alzheimer's Association.

Alzheimer's disease is the sixth leading cause of death in the United States, and fifth in California. More than five million Americans are living with Alzheimer's, at a total estimated cost of $236 billion.

To register to participate in the Visalia walk, visit http://www.alz.org/walk, or contact Bobbi Scharton, special events manager, at the Fresno Regional Office at (559) 753-8204.