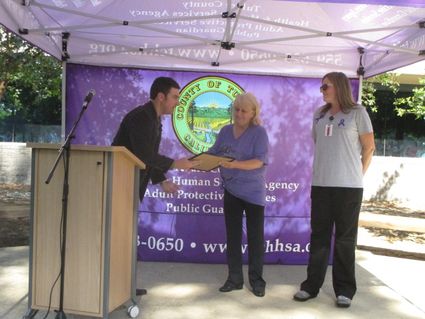 June has been designated as World Elder Abuse Awareness Month, and annual ceremonies and other events educate people around the world about this serious problem.

Elder abuse is defined as neglect, financial exploitation, physical abuse, sexual abuse or emotional abuse of an individual age 65 or older. In over half of elder abuse cases in Tulare County, the crime is committed by a son, daughter or other relative. Many times, seniors will deny victimization to protect those family members.

"Right now, we're filing about one elder abuse case a week, or 55 to 70 a year," said Ward before the ceremony. "If that's not alarming enough, for every one case that gets reported, there are up to five that don't get reported."

Most of the cases reported are financial, rather than physical abuse or neglect, according to Ward.

"The tragedy is by the time the theft is discovered, the money is gone," he said, adding that phone scams are a growing problem. "We're trying to do more and more in this arena."

Tulare County has its share of physical abuse cases also, including the case of a 92-year-old rape victim.

"Despite the brutality of the attack, she considered not reporting it," said Caity Meader, executive director of Family Services, who added that letters from a class of College of the Sequoias students helped change her mind.

"The woman wrote back to the students and said, 'I'm glad this happened to me rather than to you young folks because I won't have long to live with this memory,'" said Meader.

Boudreaux said his department was involved in an elder abuse case involving an in-home care worker overmedicating a senior and stealing from her.

The family told Boudreaux, "All the time we thought we had someone taking care of her. We will remember the guilt that we didn't recognize it. She was a victim, but we think we were also victims."

Boudreaux believes that it is important "that the sheriff's department is there for those who have taken care of us in our early years."

During his remarks about elder abuse at the ceremony, Ward said, "The impact on our families can be astronomical."

He also talked about how agencies and departments are working together to deal with elder abuse and help take care of its victims, "It's important that we send the message that (elder abuse) is not just a criminal matter."

Vander Poel told the gathering that some cultures around the world have a high respect and appreciation for the elderly.

"I don't know how our American culture got away from this," he said. "We should be valuing, honoring and paying tribute to our elderly for the things they did to get us where we are."

Vander Poel then read the following proclamation from the Tulare County Board of Supervisors, which proclaimed June 2017 as "Elder Abuse Awareness Month in Tulare County":

WHEREAS, it is our shared responsibility to ensure all seniors in Tulare County receive the support and protection they deserve; and 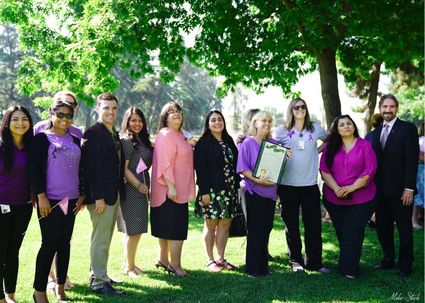 WHEREAS, it is necessary to increase public awareness of the warning signs of abuse and to bring issues of elder and vulnerable adult abuse out of the shadows; and

WHEREAS, older adults are prime targets for exploitation both by persons they know and trust - often family members or caregivers - and by strangers; and

WHEREAS, there is an estimated 125,000 cases of reported elder abuse in California annually, and for every reported case of elder mistreatment, as many as four go unreported; and

WHEREAS, in fiscal year 2015-16 Tulare County Adult Protective Services received more than 2,700 reports of abuse against seniors and dependent adults; and

WHEREAS, elder abuse effects all socio-economic groups, cultures, and races; and can include physical abuse, neglect, financial exploitation, sexual abuse, and emotional abuse including coercion and intimidation; and

WHEREAS, Elder and Dependent Adult Abuse Awareness Month is a campaign to encourage the reporting of elder abuse and to take a stand against it; and

WHEREAS, through education, recognition, and reporting, we can make a difference in the lives of elder, vulnerable adults and that heightened awareness will result in increased reporting of suspected abuse, not only in the month of June, but throughout the year.

NOW, THEREFORE, BE IT RESOLVED the Tulare County Board of Supervisors does hereby proclaim June 2017 to be Elder and Dependent Adult Abuse Awareness Month and urges every resident to become educated about the various types of abuse, how to recognize signs of abuse, and where and how to report suspected abuse.