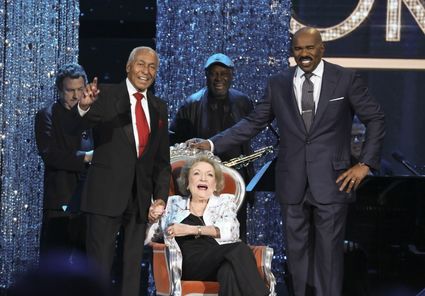 Following up on the success of "Little Big Shots," in which kids brought their incredible talents to a primetime audience, "Little Big Shots: Forever Young" features amazing seniors ranging in age from 60 to 103, showcasing their hidden talents, vibrant personalities and incredible wisdom.

Seniors featured in the premiere included 72-year-old Larry from Florida, who spent 40 years working as a plumber and is now able to pursue his passion for singing opera; and Arthur, an 80-year-old tap dancer and former performer on "The Lawrence Welk Show" from Pasadena, who showed off his fancy footwork and was surprised by Betty White, who had given him his first break on television.

Other remarkable seniors featured include Chips from New Jersey, a funny magician/illusionist; and an 81-year-old high-flying great grandma and daredevil from Florida, who is part of the famous Wallenda family of circus performers and who has performed on the sway pole for 52 years. She showed off her talent at 85 feet in the air, fearless and with no safety net, in a nail-biting performance viewers.