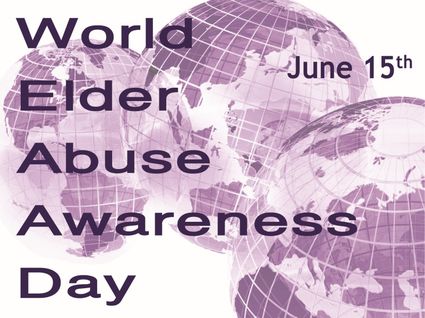 Each year, an estimated five million older persons are abused, neglected and exploited. In addition, elders throughout the United States lose an estimated $2.6 billion annually due to elder financial abuse and exploitation, funds that could have been used to pay for basic needs such as housing, food, and medical care.

Unfortunately, no one is immune to abuse, neglect or exploitation. It occurs in every demographic, and can happen to anyone. Yet it is estimated that only about one in five of those crimes are ever discovered.

In response to the problem, World Elder Abuse Awareness Day (WEAAD) was launched on June 15, 2006 by the International Network for the Prevention of Elder Abuse and the World Health Organization at the United Nations. The purpose of WEAAD is to provide an opportunity for communities around the world to promote a better understanding of abuse and neglect of older persons by raising awareness of the cultural, social, economic and demographic processes affecting elder abuse and neglect.

WEAAD supports the United Nations International Plan of Action acknowledging the significance of elder abuse as a public health and human rights issue. WEAAD serves as a call-to-action for individuals, organizations, and communities to raise awareness about elder abuse, neglect and exploitation.

Last year, the Tulare County Board of Supervisors proclaimed June 15 as World Elder Abuse Awareness Day in the county. The proclamation noted the more than 1,732 reports of abuse against seniors and dependent adults made to Tulare County Adult Protective Services in the previous fiscal year, adding that "it is estimated that as few as one in 23 elder abuse cases are actually reported."

This year, Tulare County Supervisors will take things a step further by proclaiming the entire month of June as Elder Abuse Awareness Month for Tulare County.

On Tuesday, June 6, Chairman of the Board of Supervisors Pete Vander Poel will present the proclamation at a 9 a.m. ceremony on the east lawn of Government Plaza in Visalia. Other local dignitaries, including Tulare County District Attorney Tim Ward and other representatives of his office, are expected to be in attendance.

For more information about World Elder Abuse Awareness Day, contact the National Center on Elder Abuse at 855-500-3537 or ncea-info@aoa.hhs.gov.