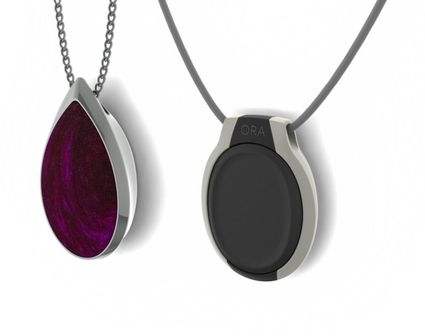 Kasiel Solutions has announced its first product, ORA, a personal safety alert device designed for seniors that is disguised in jewelry and sportswear. The device works with a smartphone, keeping the wearer safe and connected wherever there is cell phone coverage, unlike most other medical alert devices on the market that limit seniors to their home.

Other unique features of ORA include the ability for the wearer to decide who they would like contacted in the event of an emergency, and how many contacts they want. If no one is available, emergency services is then notified. ORA also allows loved ones to check in via the product's app by using a super simple chat function and checking the inactivity tracker. The app will be available for free on Google Play and the Apple Store.

"No one should have to wear something that looks like a garage door opener around their necks," said Serese Selanders, founder and CEO of Kasiel. "Seniors care about what they look like, they like to get out and about, and they want to maintain their independence. We've created a product that makes them feel safe and they can be proud to wear."

The new wearable device proved itself earlier this year. One of ORA's prototype wearers, Gladys Zirk, became seriously ill and reached for her phone during the night. When her phone fell and was out of reach, she pressed her ORA link. Instantly, her daughter and son were sent notifications, and after two minutes emergency services was contacted.

"Because of ORA I am here today," said Zirk.

Although this emergency shocked Ms. Zirk's family, they felt comfort in knowing what was happening to their mother every step of the way. The app notified them that emergency services had been called and updated them on Gladys' status until they arrived by her side.