Blood, Sweat & Tears to Headline Hands in the Community Fundraiser 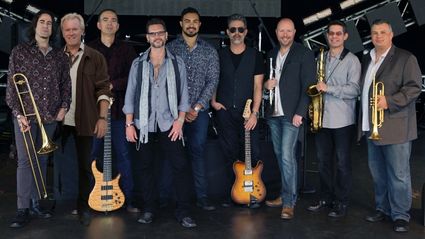 Hands in the Community will bring legendary performers Blood, Sweat & Tears to the Visalia Fox Theatre for a benefit performance at 8 p.m. on Saturday, July 15. Over the years, the band has won gold records, Grammy Awards, the respect of the best in the industry and the love of millions of fans.

It has been five decades since drummer/producer Bobby Colomby and friends assembled the first group to successfully fuse rock, blues, pop music, horn arrangements and jazz improvisation into a hybrid that came to be known as "jazz-rock." The band's second album, "Blood, Sweat & Tears," topped the Billboard charts for many weeks and beat out the Beatles' "Abbey Road" for the prestigious Album of the Year Grammy Award. That album produced three major hit singles: "You Made Me So Very Happy," "Spinning Wheel" and "And When I Die." Other memorable hits include "Hi-De-Ho," and "God Bless the Child."

"I believe BS&T has an iconic stature. It's a style of music," said Colomby, "a concept that people are coming to see, along with songs that they're familiar with."

The sponsoring organization, Hands in the Community, works with volunteers and other groups to help the needy. In Tulare and Kings Counties, its faith-based, government-funded, private and public resources exist to address crisis and short-term needs. The unique strategy of Hands in the Community targets and delivers help directly to those in need.

"The selection of BST for this fundraising concert is quite appropriate, considering the blood, sweat and tears that Hands in the Community puts into every project undertaken to help individuals in need," said Lester Moon, the organization's founder and director (and a big BS&T fan).