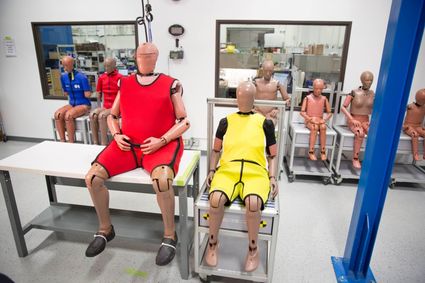 Developments over the past decades have resulted in very advanced dummies like THOR and WorldSID for frontal and side impact applications. Like their predecessors however, these dummies were still based on anthropometry of what was considered a "healthy, average" adult mid-size male and small female population in the 1970's.

Over the past few decades however, the driving population has changed significantly in age and weight. As lifestyles and medical advancement evolve with time, industrialized world baby boomers are now 65 and older and often overweight, and are still driving and leading active lifestyles.

There were more than 40 million licensed drivers aged 65 and older in the United States in 2015, according to the U.S. Department of Transportation. This represents 18.4% - or nearly one in every five drivers - on the American roads. In 2014, more than 5,700 older adults were killed and more than 236,000 were treated in emergency rooms for motor vehicle crash injuries. This amounts to 16 older adults killed and 648 injured in crashes on average every day.

It should not come as a surprise that anatomically, an elderly person is built very differently compared to someone younger, and therefore will likely sustain very different injuries during a crash. In response, Humanetics has embarked on a project to realize an ATD design to reflect the anthropometry of an elderly 70 year old small female driver by using research conducted by ICAM (International Center for Automotive Medicine) and UMTRI (University of Michigan Transportation Research Institute). Using this data, coupled with a newly designed organ system concept, the Elderly ATD will allow more precise measurements of internal injuries sustained in automotive accidents for this specific occupant group.

"As the demographics of the driving population continues to evolve, our crash test dummies and the test equipment that we design and manufacture must continue to evolve at the same rate," explained Christopher J. O'Connor, president and CEO of Humanetics. "Let's not forget the more vulnerable drivers on the road and provide a product that the car manufacturers, government agencies and research groups around the world can use to design and test a safer car for people of all sizes and ages."

In order to understand the dynamic properties of internal human organs such as the liver and spleen, Humanetics is working closely with ICAM to define anatomical features and verify performance attributes with real-world injury feedback.

"The condition, size and shape of an individual is hugely important in how severe their injuries are in any given crash," said Michigan Medicine trauma surgeon Stewart Wang, M.D., Ph.D.

Safety-minded consumers will consider crash test star ratings in the selection of a vehicle, but they might not always understand that the design used in government or consumer testing does not necessarily conform to their own body and/or age group.

Humanetics is also involved in research programs to address similar type of concerns in other regions of the world. Humanetics collaborates with other safety organizations worldwide to develop products that best reflect the current population, which car manufacturers and restraint suppliers can use as research and design tools to build the safest cars possible for every occupant, regardless of body type and age.