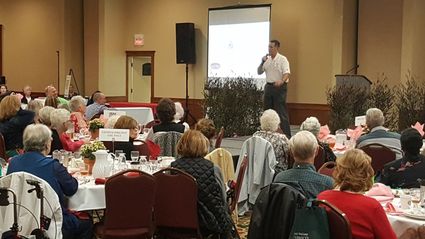 The fourth annual Heart of Seniors "Spectacular Resource Event" Luncheon, hosted by the Senior Coalition, filled the ballroom of the Wyndham Hotel in Visalia on February 16.

The event, which included a vital resource fair with vendors, a fashion show and a lunch, featured keynote speaker Jim White, the track coach portrayed by Kevin Costner in the movie "McFarland, USA." White talked about his years of coaching and provided some behind-the-scenes insight into the movie. 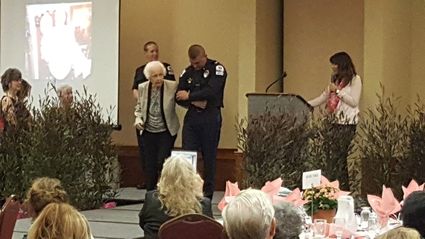 Model Jessie Tuttle and her escort from American Ambulance are about to stroll the runway at the fashion show as emcee Kathleen Remillard looks on.

"They took a lot of liberties," said White, "but they were good ones. I didn't get fired twice and I never taught in Boise, Idaho."

He said that since the film was released, the town of McFarland has had visitors from countries such as Argentina, Honduras, Japan, China and Spain.

White also shared his philosphy on life. "Life is like a rowboat," he said. "If you don't keep rowing, you're going to drift."

Because of the continued success of his high school track teams, White said his school was moved up to compete against larger schools in division 1. He was told that the decision was made to "let somebody else win."

His response was, "Let somebody else work harder than we do."