WANTED: Volunteers in Patrol for the Tulare County Sheriff's Office 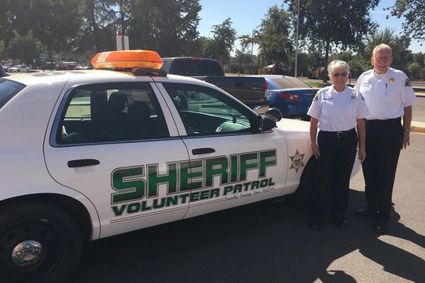 Gracie and David Jepson prepare to go out in a marked VIP unit.

In February of 1993, the Tulare County Sheriff's Department formed Volunteers in Patrol (VIP), the first volunteer unit to support its growing needs. This new branch of law enforcement was created to serve as extra eyes and ears for the officers, sharing valuable information about the communities.

Volunteers perform many of the duties that do not require sworn personnel, allowing officers to better use their time serving the community.

VIPs provide visual deterrents and command presence in the communities of Tulare County. They also offer community assistance where sworn personnel are not necessary, but uniformed presence is valuable.

VIP recruitment is currently gearing up. Both men and women are encouraged to volunteer, even if they have no law enforcement experience.

"I was quite green," admitted Connie Hernandez about her first day as a VIP.

Her partner was driving when they received a request to relay a unit, that is, to move a marked sheriff's vehicle from one place to another. She slid behind the wheel of the sheriff's vehicle and merged onto Highway 198, with her partner following behind her.

"I was going 50 mph and there were no cars in front of me," Hernandez said. Then she looked in her rear-view mirror.

"All the traffic was behind me," she said, adding that ten cars were slowly following behind her and her partner's vehicles.

Now, eight years later, Hernandez said she gets a lot of appreciation for her volunteer work as a VIP. She's one of dozens of VIPs at the sheriff's office and more are needed.

"The VIPs serve as extra eyes and ears in the community and perform duties that don't require a sworn officer," Boudreaux said at the Volunteer BBQ at Mooney Grove Park. "They deter crime just by their uniformed presence in the community.

"We don't know how many times someone was about to do something criminal and changed his mind because a VIP was on patrol in the county," he added.

In addition to checking on vacation property and schools, VIPs reach out to the community, paint over graffiti, monitor Project Lifesaver, transport patrol cars, reach out to youth, assist children with court appearances, run errands and help with search and rescue, parades and traffic control.

Long-time VIP Ron Vigario pairs up with newcomer Bob Basham once a week to deliver inter-office mail as part of their VIP duties. They begin at headquarters, go downstairs to the sally port to the main jail and head over to the courthouse.

From there, they go to the Porterville, Pixley and Cutler/Orosi substations.

"We need more people to do a lot of good things," he said.

Typically, VIPs volunteer through a substation near them. They have an elected board and attend monthly meetings under the supervision of sheriff's office patrol lieutenants.

Each new VIP attends a 40-hour VIP Academy which is held on Saturdays. They also go through a background check.

"Anyone who wants to volunteer would serve as a vital function to the sheriff's office," he said.

"We're always needing volunteers," agreed Teresa Douglass, the department's public information officer. "There is so much more they can be doing if there were more members of Volunteers in Patrol."

How to Become a

Visalia: VIPs meet at 6 p.m. on the fourth Thursday of each month at headquarters, 2404 W. Burrel Ave., Visalia. The next meeting is January 26. 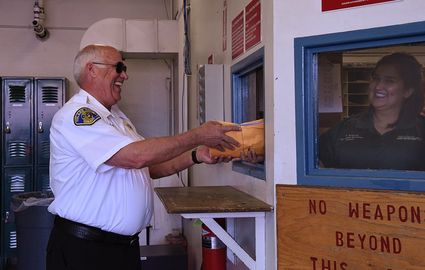 Porterville: VIPs meet at 6 p.m. on the first Thursday of each month at the Porterville Substation, 379 N. 3rd St. Next meeting is January 5.

Pixley: VIPs meet at 4 p.m. on the third Wednesday of each month at the Pixley Substation, 161 N. Pine St. The next meeting is January 18.

Cost: Each volunteer is responsible for purchasing a VIP uniform which consists of black pants, white shirt, black shoes and a black jacket with Tualre County Sheriff's Office patches on both shoulders.

To fill out a form, visit: http://www.tularecounty.ca.gov/sheriff/index.cfm/administration/recruitment/volunteer-programs/volunteer-forms/