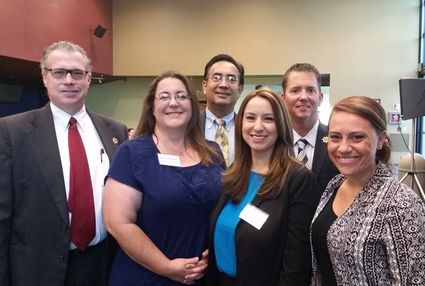 The Tulare County District Attorney's Elder Abuse Task Force has been growing as it uses some of the $400,000 in grant funding it was awarded in July. The two-year funding from the California Governor's Office of Emergency Services allows the county to expand its efforts to protect seniors and broaden its community educational outreach.

Elder abuse is defined as neglect, financial exploitation, physical abuse, sexual abuse or emotional abuse of an individual age 65 or older. In over half of elder abuse cases in Tulare County, the crime is committed by a son, daughter or other relative. Many times, seniors will deny victimization to protect those family members. The National Center on Elder Abuse estimates that only one in five cases are reported.

For years, the D.A.'s office has been working with other agencies to respond to reported elder abuse, but they were often overwhelmed by "the sheer volume of cases that adult protective services receives," said Nicole Burnham, victim advocate with the District Attorney's Office.

"This grant will allow us to offer services to the suspected victims of elder abuse that are in the reports that adult protective services is receiving," she said. "Traditionally, we would only be offering services to victims who are listed on law agency crime reports."

In addition to serving more possible victims, the grant allows the D.A.'s office to better deal with each case.

"We had two doctors from USC here to conduct a community assessment of how we as an agency respond to suspected elder abuse, and how we can bridge gaps," said Burnham, adding that the D.A.'s office was already working with other agencies to deal with reports of elder abuse.

"We co-host a monthly multi-disciplinary team meeting we lovingly call the MDT meeting," she said.

The meeting is attended by the D.A.'s office, law enforcement, adult protective services, an elder abuse victim advocate (Burnham), healthcare professionals and an ombudsman from the Kings/Tulare Agency on Aging.

Each group has different responsibilities and limits on what they can and cannot do. For example, adult protective services can meet with people in their homes, but they cannot investigate elder abuse allegations. The ombudsman advocates for the rights of possible elder abuse victims.

"We discuss in a roundtable in a confidential manner who can best help a senior who may at risk of abuse or neglect, and what services may be available," said Burnham.

"The focus right now is to expand the multi-disciplinary meeting," said Burnham. "We're looking for people who work in agencies or senior service providers that may be long-term care facilities, senior centers in Tulare County, and senior organizations. We'd like for them to be part of our expanded meeting because our goal is to make sure we are aware of any programs that might benefit at-risk seniors."

Burnham said she will "be blanketing the county," making presentations to senior facilities, senior organizations and senior centers. "Our grant will allow us to host elder abuse symposiums, one in north county and one in south county, with experts in the field."

The first symposium could be held as early as fall 2017.

"We're hoping for someone who is bilingual," said Burnham. "It's in the works, but I'm not sure how soon another person would come on.

For more information, or to report suspected elder abuse, call (559) 636-5471 or visit http://www.da-tulareco.org/victim_witness.htm.