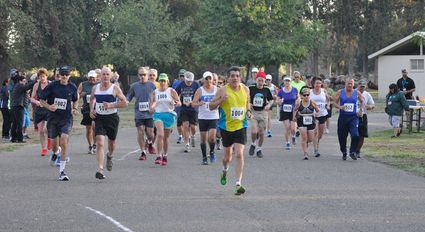 The 5K/10K race was one of the highlights of the 2015 Visalia Senior Games.

The 2017 Visalia Senior Games, the Central Valley's only senior games, will be held at various locations in Visalia on March 16-19 and March 24-26. Moving the event from October and scheduling events over two weekends instead of several consecutive days are among the changes the committee is making after hosting the first Senior Games in 2015.

Those games were considered a success, attracting athletes from 50 California cities. A total of 237 athletes participated, including some traveling from as far as Oregon and Texas.

"The first year we did the games, we conflicted with the national senior games, which takes place every year in Utah," said Jeannie Greenwood, City of Visalia Parks and Recreation Department recreation manager, adding that the 2015 scheduling affected the committee's ability to recruit teams for team sports such as softball.

"We got a lot of feedback and we made some changes based on that feedback," said Greenwood. "People preferred to play on weekends. A lot of people couldn't take time off during the week to participate."

The 2015 Senior Games included competition in sports such as tennis, bowling, table tennis, horseshoes, softball, pickleball, archery, golf and a 5K/10K race. Next year's games will include several new events.

"We received a lot of feedback requesting events we didn't have listed and the two biggest events were track and field, and swimming," said Greenwood. "We're still identifying the events within each one. We're still in the early planning stages of that."

Also to be decided are the locations of some of the competitions.

"Right now, we're still looking at high schools based on the sizes of their pools," said Holly Ellis, Senior Games coordinator. "We are working with our youth swimming parent boards."

"Through (Visalia) parks and recreation we provide swimming team opportunities for students, and the parent boards who oversee it are coming on board to put this this swimming component together and help run the events," added Maggie Kalar, recreation supervisor.

The 2017 games will have more "exhibition sports," according to Greenwood. "One of the things we learned at the first Senior Games was that we didn't have a lot of opportunities for people who weren't (at a competitive level) to participate."

Exhibition sports will include darts, cornhole and Texas hold'em. Disc golf is also being planned.

The 2015 games had 103 registered volunteers who worked 560 hours, according to Greenwood. More volunteers will be needed at next year's games.

"Track meets, especially, require a lot of bodies to facilitate," said Greenwood, who estimated that twice as many volunteers would be needed next year.

For more information about competing or becoming a volunteer or sponsor, visit http://www.visaliaseniorgames.com, or contact the Visalia Parks and Recreation Department at (559) 713-4395 or recreation@visalia.city. The website has a registration form, rules for each event, and photos and results from the 2015 Visalia Senior Games.