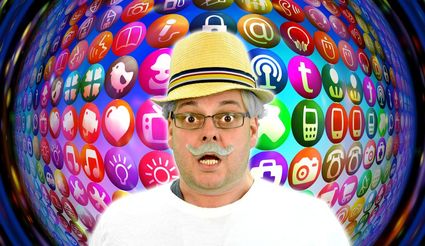 According to recent survey results derived from the American Grandparents Association and visitors at its content site, Grandparents.com, the vast majority of people aged 60+ in the United States are not as tech-deficient as their millennial grandchildren might assume.

The survey showed an overwhelming consensus that the Internet, new technologies and even mobile apps have become commonplace among those in our grandparents' demographic. Nearly two-thirds of respondents said they own a smartphone, which is a significant departure from the flip-phones and landlines of even five years ago.

Close to 60% of those surveyed said they only sometimes need help navigating technology, while almost 20% designated themselves as "extremely" fluent and found new technologies "easy for me to use." Less than 1% of respondents said they were "not at all" involved with the Internet, while nearly everyone confirmed that they are checking search engines like Google and email frequently.

Grandparents' digital adaptability extends to social media. Over 70% have active Facebook profiles-which may be less surprising than the 30% who said they check Pinterest regularly, or even the 8% and 9% who are now on Twitter and Instagram. Grandparents.com's survey results confirm the findings of a Pew Research Center report that found a huge increase in social media activity amongst seniors from 2005 to 2015.

"What we're seeing is an older generation rapidly adapt to new modes of connecting and communicating so that they can maintain wonderful relationships with their grandkids," said grandfather and American Grandparents Association CEO Steve Leber. "There have been major shifts over the past decade, and grandparents are using smartphones to stay up to date on everything from current events and the stock market to last night's sports scores. The majority of older adults are shopping, searching and conducting a significant amount of their lives online. This group is more technologically sophisticated than they've ever been."

Despite these clear shifts in behavior, America's grandparents remain romantically old-fashioned. Only 5% would prefer to meet people through online dating while 70% opted for a face-to-face scenario.

Even with significant majorities of the survey population actively engaging digital technologies on a regular basis, "understanding technology" still ranked number one on the list of things these respondents said they need help with in life, narrowly edging out exercise and housework, and statistically dwarfing their concerns about keeping finances straight or managing their health. This concern with keeping up could hardly be a clearer indication that our grandparents have joined along with the tide of technology and they seem poised to continue on that path.