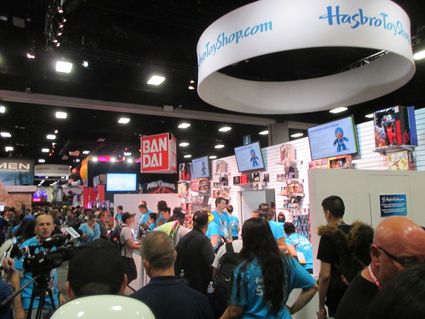 The San Diego Comic-Con has become a major cultural event.

The San Diego Comic-Con, the annual event that attracts more than 100,000 comic book collectors, movie and television show fans each summer, is not just for young people.

If you ever have the opportunity to attend this pop culture celebration, take a moment to look around the exhibit hall and the rest of the San Diego Convention Center. You will see that a good number of fans, dealers and artists in attendance have distinguished gray hair.

Many of the cartoonists showcasing their work in the booths at Comic-Con are senior citizens. Age has given them experience and confidence, along with an interest in doing what they want to do, without worrying about the latest trends or fads.

Rick Geary, 70, has been working in comics since 1977. He was a contributor to the National Lampoon for 13 years and his comic stories have also been published in Heavy Metal, Dark Horse Comics and the DC Comics/Paradox Press Big Books. His work has also appeared in The New York Times Book Review, MAD, Spy, Rolling Stone, The Los Angeles Times and The Old Farmer's Almanac.

"First of all, I could never stop drawing," he explained. "Second of all, being self-employed, I can never retire. I have to keep making a living.

"I just finished my latest book in the 20th Century Murder series, 'Black Dahlia,'" he continued. "I'm also working on an epic graphic novel about the Lincoln County War, which I hope to get funded on Kickstarter later this year."

Geary, who travels to San Diego every year from a small town in New Mexico, doesn't follow trends.

"I've always been pretty clueless about what sells, and every time I base a project on that, I fail miserably," he said. "Most of the time I work on what I feel like doing."

Sergio Aragonés, whose work has appeared in Mad Magazine since 1963, is also known for his comic book character "Groo," one of the longest-running "creator-owned" comic book properties, as well as for creating the animation for several movies and television shows, including Dick Clark's "TV Bloopers and Practical Jokes."

At 80, Aragonés believes that age can be an advantage to a cartoonist.

"Through the years, we have more respect from publishers and fans so we can do what we want to do," he said. "We know now what's good and what's bad. We know the rules. Nobody has to tell us because we know them by heart.

"I'm still doing what I was doing many years ago," he said, noting that he is still with MAD Magazine and still drawing Groo, which will continue with his new comic book featuring Groo and Tarzan. He also has no plans to retire as a cartoonist.

"People usually retire from work," Aragonés explained. "We don't work. We're doing what we were doing in the third grade, but they're paying us now. It's like breathing. You can't retire from breathing."

Scott Shaw, 65, also has an impressive resume, having done comic book work for Hanna-Barbera's "The Flintstones," "Captain Carrot and His Amazing Blue Crew" and "The Simpsons." He is still active as a cartoonist, and has had a booth at the San Diego Comic-Con for decades.

"I was one of the kids that started Comic-Con in 1969," he said, before answering questions about his current projects.

"I'm working on a series of children's books, doing 150 illustrations for Dark Horse Comics, and a new line of hats with my characters," said Shaw, adding that he is also illustrating an Angry Birds story for Rovio, a company based in Finland. "I just finished working on a Flintstones (television) pilot for Warner Bros.

"I'm not interested in sitting around doing nothing," he said. "I've also got books to write on the history of comics. I've got no time to rest."

If there is any cartoonist who has successfully managed to keep his cutting edge sense of humor intact over the years, it has to be Bob Burden, who created his first major comic book hero, The Flaming Carrot, in 1978. Now 64, he is working on "a bunch of stuff" including Agent Strange, one of the FBI's top agents who turns out to be an alien from another planet, but is too vital to an important case to be terminated.

Another project is Jackie Fiasco, whose magic wand "was run over by a truck so it doesn't work very well." And then there is Mullet Force Six, described as, "Six guys with out-of-style haircuts who have been promised fame, fortune and free DSL to fight evil."

"They really have super powers," said Burden. "One controls furniture with his mind, but he has a terrible time with wicker. Another one is a good guesser."

Burden said he feels fine and intends to be a cartoonist for years.

"I think if you don't keep your finger in the pie and keep going, it's not good for longevity," he said.