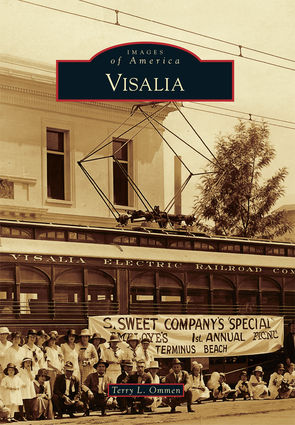 When the first settlers arrived in what is now Visalia in the fall of 1852, they found a lush river delta in the midst of an oak forest at the base of the Sierra Nevada. The soil was fertile, just right for farming, enabling Visalia to take root as the oldest town in the southern San Joaquin Valley.

For the next 163 years, the town provided important products and services, like David Walker's Saddle Shop that became home to the famous Visalia Stock Saddle and Ben Maddox's Mount Whitney Power Company that harnessed water from the Kaweah River for electricity. Now with a population of over 130,000, the county seat of Tulare County continues to be surrounded by some of the most productive farmland in the world and is a vibrant business center.

Arcadia Publishing and The History Press have released Visalia, a book featuring old photographs that reflect the history of Visalia, the oldest town in the Southern San Joaquin Valley, along with historical information to put it all into perspective. Terry Ommen, our own history columnist, compiled the photos and wrote the text.

Although born in Minnesota, Ommen has lived in California for the past six decades, including 45 in Visalia with his wife, Laraine. He loves the town and especially loves its history. He has written extensively about it and this book is another product of his passion.

Ommen writes about local history frequently in local publications including magazines such as Lifestyle and The Good Life, and contributes occasionally to the Visalia Times-Delta newspaper. He is seen as a local history authority and is called on frequently for answers to historical questions.

He believes that this work will add to the reader's knowledge of local history and will encourage them to go deeper with their understanding of Visalia's interesting past.

Ommen is also the author of Visalia: Then & Now, which was published by Arcadia Publishing in 2009, and Wild Tulare County: Outlaws, Rogues & Rebels, published by The History Press in 2012.

For more information about all three books, visit http://www.arcadiapublishing.com and search for Visalia.