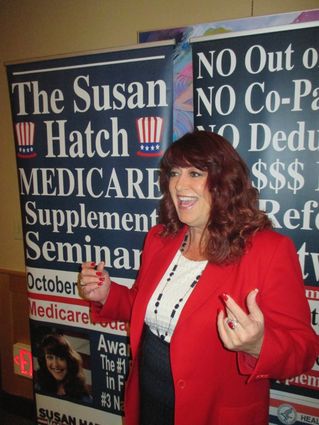 "Medicare insurance is the most confusing thing for a senior to figure out," Susan Hatch told members of the Senior Care Organization at their October meeting at Café 225 in Visalia.

Hatch, a Medicare insurance agent, advocate and specialist, said that ever since Original Medicare started in 1965, every hospital in the country accepts it, along with 97% of all doctors.

"Medicare Advantage is different," she said. "You give up your Original Medicare card and replace it with the HMO card, which requires permission to go to a limited approved list of local hospitals, doctors, labs and skilled nursing facilities.

"The sad thing about it is that seniors have no idea what they've done," she continued. "They think they have their Original Medicare card, but they don't have it at all. I never realized it was this limited until many seniors called me with tons of complaints and said they got kicked out of their nursing facility too early or they wanted to go to Stanford, etc. I will not enroll any new client in an HMO anymore. Nothing good comes from it when they get very ill and need other options out of their local area.

"Seniors can't leave an HMO anytime, unless they move out of the service area, apply for a Medicare Supplement or a stand-alone Part D Drug Plan during the enrollment period, before December 7th. "

Hatch described Medicare's Supplement Plan F as "the best coverage plan in the country." Although it's not free – it has a monthly premium – it offers no co-payments and total freedom. The plan is scheduled to be eliminated in December 2019. She added that anyone with that plan can keep it for life if they sign up before then.

She explained that she is not in business for the money. For those in the insurance business, "there's no money in supplements. I might get $12 a month. But this is my passion. I'm saving lives and I love it."

Hatch advises those on Medical Advantage HMO or Part D drug plans to stay aware of their drug plan and co-payment changes. "You should never be loyal to one plan every year. They change prices and provider lists. Whatever (plans) you see in the mail, you should throw into the trash. For stand-alone drug plans or a HMO, just contact HICAP or Medicare to go over your options and prices. You can call Medicare 24/7, but don't call during the day, you might be on a long hold. Call at night and you'll get to them very quickly."

Seniors often tell her that they can't afford a Medicare supplement plan. "I tell them without it, you're going to face co-payments and huge restrictions," she said, before sharing her response to seniors who dismiss supplement plans because they are in good health. "If my car has 300,000 miles on it, I'm not going to say that it doesn't break down."