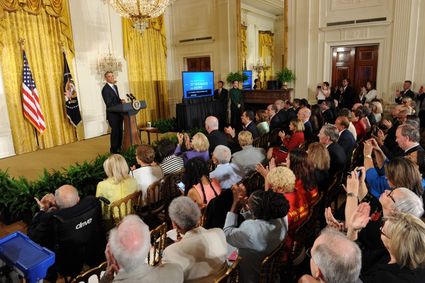 President Obama delivers remarks in the East Room of the White House.

The 2015 White House Conference on Aging (WHCOA) was held at the White House over the summer. In addition to the older Americans, community leaders and advocates in attendance, there were more than 700 watch parties, representing every state of the Union.

Speakers and audience participants discussed a wide range of topics from caregiving to financial security to technology and more. The 2015 White House Conference on Aging highlighted the importance of supporting the aging population in the United States. The Obama Administration announced a number of key deliverables to help empower Americans as they age.

President Barack Obama, who delivered his remarks in the East Room of the White House, noted that one of the best measures of a country is how it treats its older citizens. He said that some of this country's greatest triumphs are Medicare, Medicaid and Social Security, created by Congress in 1965 and 1935, respectively.

"Together we declared that every citizen of this country deserves a basic measure of security and dignity," Obama said. "That choice saved millions upon millions of our people from poverty, and allowed them to live longer and better lives."

Obama made a key announcement related to planning for retirement: the Labor Department is going to make it easier for state-based retirement savings initiatives to help workers who don't currently have access to a 401(k) at work save for retirement.

The president also touched on the many initiatives throughout the federal government that support older Americans. The life of the Medicare Trust Fund, for example, has been extended by 13 years since the Affordable Care Act was signed into law in 2010. As a result of the act, nine million seniors have received significant discounts on their prescription drugs, and more than 40 million people on Medicare have received free preventive services. The president also talked about ways to combat elder abuse.

Department of Health and Human Services Secretary Sylvia Burwell highlighted the new steps her department is taking to improve the quality and safety of nursing homes, and shared a video recapping the five WHCOA regional forums.

The agenda also included panel discussions on "Caregiving in America," "Financial Security at Every Age," "The Power of Intergenerational Connections," "Healthy Aging," "Elder Justice in the 21st Century" and "Technology and the Future of Aging."