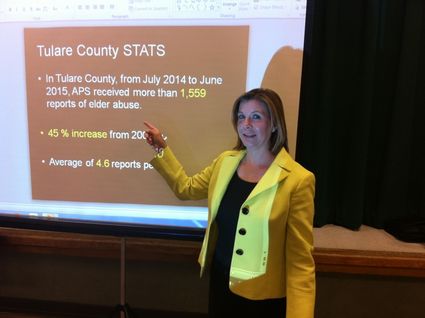 Bethany Berube addresses an audience at the Visalia Senior Center.

"Every year, an estimated five million – or one in ten older Americans – are victims of elder abuse, neglect or exploitation," according to the National Center on Elder Abuse.

"It's a huge problem," said Bethany Berube, J.D., public guardian with the Tulare County Health & Services Agency and division manager for Adult Protective Services, before the second of eight presentations for seniors held around the county last month. "In Tulare County from July 2014 to June 2015, Adult Protective Services received more than 1,559 reports of elder abuse. This is a 45% increase from 2009-2010, and it represents an average of 4.6 reports per day."

Elder abuse not only includes physical abuse and neglect, but also financial abuse, the focus of last month's presentations.

"Financial abuse is the fastest growing category of elder and dependent abuse," explained Berube, adding that only one in 44 cases are ever reported. "People are embarrassed if they are duped. Sometimes there's the fear of retaliation."

Seniors are targeted because they are isolated, vulnerable and trusting, according to Berube. "We want to make them aware of the latest scams."

She started off her presentation by warning about the "Foreign Lottery Scam," conducted by phone or email, which tells seniors they won a lottery in another country, such as Nigeria or Jamaica. They are then told that they first need to send money for "processing fees" before they can receive their winnings.

Berube cautioned her audience at the Visalia Senior Center about email scams that get people to follow a link where they end up sharing their personal information with the email sender.

"Hopefully, you all know not to respond to email that you are not familiar with or that is unsolicited," she said. "The bad guys are good at making emails look legitimate. Be on alert for anything that has a link, that allows them to gather your personal information."

Berube added that some types of emails to watch out for have headings like "your complaint received," "notice to appear" or "free or easy money."

"We've seen some that say 'district court summons,'" she added. "IRS is a big one that will also come with a phone call. The IRS does not send emails. It's always good to call the IRS, but not at the number in the email. If it's something unsolicited, you should be on guard."

If you receive an email that appears to be from your bank warning you of a problem, Berube advises you to call your bank branch about it.

Robocalls, computer-generated phone calls, now comprise 20% of all phone calls, and many are scams, said Berube. "If you receive a lot of robocalls, the best thing you can do is call your phone company and ask if they have a way to screen these calls."

Often, people will receive a phone call telling them that "unauthorized credit card activity" is suspected on their account. They may even be told that their electricity is about to be shut off. This is usually a scam known as "phishing" where the goal is to gather personal information, including bank account or credit card numbers, which leads to identity theft.

"My advice is to hang up and call your electric company on your own," said Berube. "It's shrewd to be rude. I'm giving you permission to hang up. Never provide personal information in response."

Another scam is known as the "Grandparent Scam," which starts with a call telling an unsuspecting senior that his or her grandson "is in trouble in Peru" and needs money right away. Often, this call includes the caution that there is "a gag order" so don't say anything about this to anyone. The red flags, according to Berube, are the insistence on secrecy, the sense of urgency and the requested use of MoneyPak Green Dot cards, which are untraceable.

Seniors were also told about the "Sweetheart Swindle," where someone pretends to be a love interest to gain access to a person's finances, as well as the "Medical Alert Scam," where someone promises some free medical device that "will be charged to Medicare."

"The device never arrives and then you will not be able to purchase the device through Medicare," said Berube.

She also cautioned seniors to never sign blank insurance forms, don't buy medical equipment from door-to-door salesmen, and be careful if you decide to do a reverse mortgage. "Read before you sign anything – wills, transfers of property, power of attorney," she said.

The mission of Tulare County Public Guardian & Adult Protective Services is to "Protect older and dependent adults from abuse and provide excellent public service to the community." For more information, call (559) 623-0650.