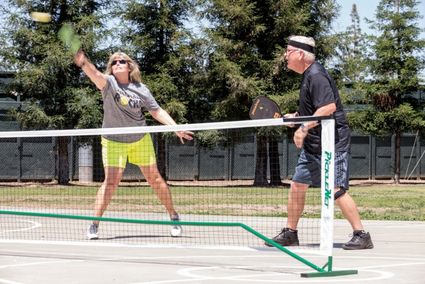 Pickleball is "easy to learn and somewhat senior-based."

Pickleball keeps growing in popularity in the South Valley, with many seniors coming out to play on the pickleball courts at Recreation Park in Visalia on at least a weekly basis. The two courts were opened to the public with a grand opening ceremony and ribbon-cutting on December 13.

"Pickleball has been called 'the fastest growing sport in America,' and we are seeing that right here in Visalia," said Cheryl Waymack, USA Pickleball Association (USAPA) ambassador for the area. "We outgrew the two new courts before they were even finished, and we continue to look for additional space. I would predict our numbers will more than double in the upcoming year."

Pickleball, which has been described as "a combination of table tennis, tennis and badminton," uses a kind of Wiffle Ball and a paddle that looks like a large table tennis paddle. The rules of pickleball are similar to those of tennis. There are a few differences, however, such as not being allowed close to the net except to return a ball hit there by your opponents.

Three United States Congressmen, Joel Pritchard, William Bell and Barney McCallum, are credited with inventing the sport in 1965 in Bainbridge Island, Washington, as a way to keep their kids occupied that summer. They originally used table tennis paddles and a Wiffle Ball, and lowered the net on their badminton court. Neighbors, friends and others started playing, and the sport grew in popularity.

"It's easy to learn, and somewhat senior-based," explained Dan Fox, Visalia parks and recreation pickleball coach. "Seniors can play it and it's competitive. In one or two evenings, someone can learn it and be competitive."

Visalia Vice Mayor Warren Gubler has been one of the main pickleball proponents in the city. He first became interested when he saw pickleball courts near his parents' home in St. George, Utah, that were "always packed."

"We had friends who were playing pickleball in Fresno, so we started watching videos and decided we wanted to play," said Waymack. "Visalia Rec Department was offering a class, so we took it and began playing." 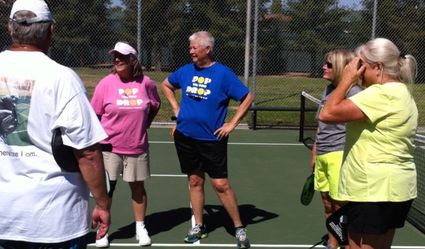 "We have watched pickleball in Visalia grow quickly in the last few months," she continued. "Pickleball Visalia on Facebook now has over 150 members, with new members joining every week."

There is also a Facebook page for Pickleball Tulare.

"We regularly see many players waiting to play on the new courts, with some evenings having more than 15 players in attendance," said Waymack. "I would estimate we have over 60 regular players between Visalia and Tulare combined."

The Visalia Parks and Recreation Department, which built the pickleball courts, has added "Indoor Drop-In Pickleball" and a new "Doubles Pickleball League" to its schedule of summer events. For more information, call 713-4365 or visit http://www.liveandplayvisalia.com.

For the love of the game, Pickleball. Anything to better the group of Pickleball. This game is growing and the city has to meet the demand for more courts. Many players used to play tennis, well tennis no more for one medical reason or other. Pickleball is the next best thing. Keeping us moving and active!

Hi. My name is Jill and I'm a pickleball addict. :-D