Nation's Only Accredited Suicide Hotline for Seniors in Jeopardy 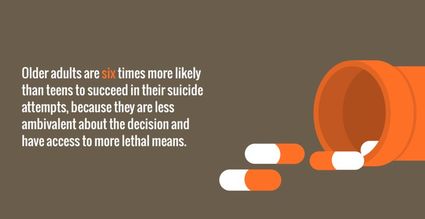 After 40 years in existence, the nation's only accredited, 24-hour suicide hotline and warm-line for seniors is in jeopardy, due to state budget cuts in California. The toll-free Friendship Line recently lost two-thirds of its annual funding, leaving a budget gap of $700,000 per year, and prompting the Institute on Aging to launch a crowdfunding campaign on IndieGoGo.

"Older adults are two to three times more likely than teens to commit suicide, primarily because of loneliness, isolation and undiagnosed depression," said Dr. Patrick Arbore, founder of the Friendship Line, a program of the Institute on Aging. "In addition, seniors are six times more likely to be successful than teens in their suicide attempts, because they are less ambivalent about the decision to take their own lives, and because they have access to more lethal methods."

Friendship Line volunteers and staff make and receive nearly 10,000 phone calls each month to connect with isolated, lonely and potentially suicidal older adults, ensuring that no senior ever has to feel isolated, lonely, or uncared for. The toll-free, anonymous crisis intervention line is open seven days a week, 24 hours a day, 365 days a year, and volunteers are trained to recognize depression and suicidal thinking among older adults.

"We provide a lifeline, whenever they need it," Arbore added. "For many of our clients, the voice on the other end of the Friendship Line is the only human interaction they can count on."

In response to the loss of funding, the Institute on Aging launched the IndieGoGo campaign last month, with the help of the World Champion San Francisco Giants, who donated $5,000 to the campaign. The Giants also featured the Friendship Line in their Community Clubhouse during a pre-season game against the Oakland Athletics, announced the IndieGoGo campaign on the big screen during the game, and donated authenticated baseballs and a bat bearing autographs from Hunter Pence, Buster Posey, Joe Panik and Madison Bumgarner.

"We are humbled by the quick and generous response from the community," said Arbore. "We believed that once the community knew how common suicide is among seniors, and how effective the Friendship Line is at preventing it, they'd step up to support seniors. So far, they have exceeded our expectations. But we still have a long way to go."

To learn more about suicide among seniors, and how to contribute to this lifesaving effort, visit http://igg.me/at/friendshipline.