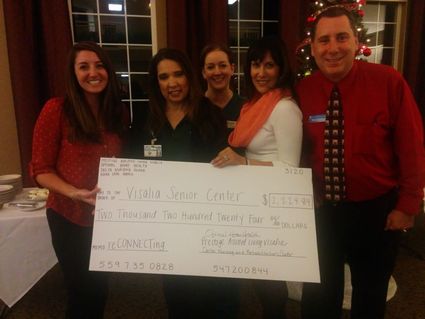 More than $2,200 was raised as a donation to the Visalia Senior Center by the event, which was hosted at Prestige Assisted Living.

The Visalia Senior Center received more than $2,200 as a result of a fund raising campaign, courtesy of the coordinating efforts of Prestige Assisted Living in Visalia and several area companies.

Optimal Home Health, Asera Care Hospice and Delta Nursing & Rehabilitation Center came together at the Prestige facility in Visalia on December 18 to host a Reconnecting Gala & Open House, with estimates of nearly 100 people in attendance.

"I think that the event was the culmination of the season of philanthropic effort by these agencies and Premier," said Michael Mayfield, Executive Director at Prestige Assisted Living. "The really fun thing about this is that the residents got really involved as well. I thought it was cool the residents baked goods and deliver pies and got to do a variety of activities."

The idea for the event came about in October, Mayfield said, with fund raising efforts beginning in November. A Thanksgiving pie sale was also held, with $300 raised as a result. The Good Life Newspaper, published by Kast & Company Communications, purchased 24 pieces as a part of the drive, and enlisted the help of Hands in the Community to help with delivery of the pieces to unsuspecting seniors in the Visalia area. The pies were delivered in the days leading up to Thanksgiving.

Mayfield said the Senior Center plans to use the money to help provide lunches at the Center for those who can't afford it. "With the population we serve here, it was a natural fit," said Mayfield.