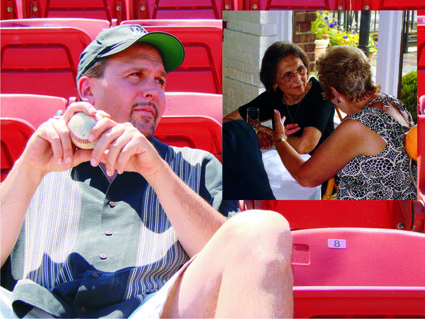 Chris Daniel will talk about the upcoming decision he will need to make about his mom when he speaks at the Heart of Seniors event on Feb 12.

Chris Daniel, the jovial host of KMJ's radio's afternoon talk show, became serious and sullen as he spoke about his dilemma.

You see, Daniel has a predicament about his mother, who lives 3,000 miles away in New York City.

"I've always been very close to my mom and dad," said Daniel, who at 54 has lived the typical relocation-filled life of a radio personality since 1984 when he launched his career after moving to Tucson, Arizona. "She's always had a razor-sharp mind, and she's brilliant. She pushed us a lot toward education." He heaped the accolades on his mother, describing her as a "79-year-old former beauty contestant with brains," who earned her Phi Betta Kappa honors in school and holds a master's degree in speech.

His dilemma is over his forthcoming decision about what to do about his mother, who he said "has something wrong, but none of us know what it is." That struggle and ultimate decision will be the focus on his talk when he is the keynote speaker during the Heart of Seniors event on Feb 12 at the Visalia Holiday Inn & Conference Center. Hosted by the Senior Care Organization, the event is designed to offer information and resources to family members and caregivers of the elderly.

The inaugural event in February 2014 sold out, and has been moved to the larger venue to allow for more to attend, where they will hear Daniel talk about his mother, their relationship and his pending decision.

Not that he has the weight of the burden all on himself. Daniel has a brother Paul, 40, and sister Jennifer, 53, who will also weigh in regarding what to do about their mother. Although his 80-year-old father is still very much alive, Daniel said he's "dealing with the normal issues of aging himself. But nowhere near what my mother is enduring."

"We are the typical Polish family," Daniel said. "We are not a family having a history of intervening, and we don't talk about stuff like this. What appears to be the next thing I have to do, as the oldest son and feeling that pressure, is to have THAT conversation."

There may have been a roadmap toward that talk starting years ago, when his grandmother was diagnosed with dementia, and Daniel's mother took on the role of taking care of her, despite Grandma's living nearly 1,000 miles away in Minneapolis.

"My mom was racking up the frequent flyer miles flying there and back as Grandma got sicker and sicker," he said, adding that since his Grandfather had died there weren't any options. "Her problem was that although her mind was going, her body was not. These people live until they are 95. But because she didn't die until her mid-nineties, it took her to the final stages of dementia, and my mother saw it all."

"It terrified my mom that it was going to happen to her," Daniel said. "She got to see every bit of it." And then just two to three years later, in her late sixties, the woman who Daniel said "the mind has always been important to her" began to become forgetful. "It was the same with dad, he's an older guy and has his senior moments. But mom got worse and worse. The problem is having all three children not there, and a husband who either doesn't see it or is in denial.

"Last year she lost 10 credit cards, and she lost her wallet," he said, explaining that as the undiagnosed situation progresses, the family's nature of not addressing the issue is complicating things. "We are pretty good at not making it an inviting conversation to have," he said, adding that if the subject comes up with his parents, the conversation gets steered in another direction.

"We all see it," he said. "I see my parents every two years, or someone else tells us. She won't go to a doctor about it, but she has something. We just don't know what." He said during a recent phone conversation "we spoke for 20 minutes and she repeated the same thing five times. She just doesn't remember."

While the story Daniel will tell is heartbreaking as well as unfinished, he says he doesn't believe it is out of the ordinary. "I don't think my story is unique, I think it is common. I'm frustrated and feel guilty about being so far away. I'm worried for my dad, and what's he going to do? As far as talking to my mom, I'm the one. I feel terrible about it, I have no idea what to say. I feel like I'm losing her already," he said.

To attend Daniel's story, attend the Heart of Seniors event. For more information about the event, call 559-972-9800.