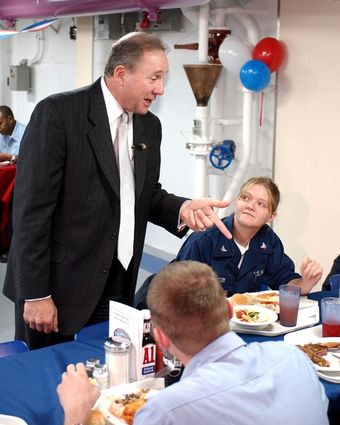 Michael Reagan talking with Navy personnel during a visit onboard a ship. Reagan will speak in Fresno Nov 12 at an event free to the public.

At press time, the event was slated to be held at the UC Fresno Campus, 550 E Shaw Ave in Fresno from 7:30 a.m. to 1 p.m. Reagan, the son of former president Ronald Reagan who died in 2004 following a ten-year battle with Alzheimer's, will be speaking on his experiences caring for his father and the toll it took on his family and friends. Family caregivers will also be speaking about their experiences caring for their loved one with Alzheimer's disease and how they are coping.

Family caregivers will be admitted to the event for free, however, reservations are strongly encouraged due to limited space. Admission for healthcare professionals is $15, and 2 hours of CEU credit is available.

An estimated 5.2 million Americans of all ages have Alzheimer's Disease, according to the Alzheimer's Association, with 200,000 of those individuals younger than age 65. Approximately 500,000 die each year because they have Alzheimer's. In 2013, 15.5 million caregivers provided an estimated 17.7 billion hours of unpaid care valued at more than $220 billion. 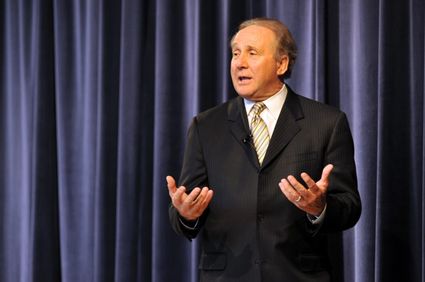 Celebrating the Caregiver will feature breakout sessions with topics pertinent to the event. These will offer supportive resources to family caregivers or healthcare professionals. Several health care resources will be available to attendees to reach out for additional information or support.

Reagan is the author of the autobiography Michael Reagan: "On The Outside Looking In", which he published in 1988. In 2005 he wrote "Twice Adopted" about his feelings of rejection being adopted, parents divorcing and becoming a Born Again Christian.

The Alzheimer's Foundation of Central California is a non-profit organization that does not receive any government funding. All services are provided through fundraising and private donations. For more information please call Tish Davis at Auspice Home Care at 559-458-8060.