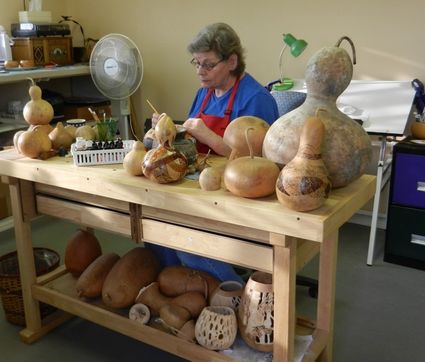 Rosemary Catron has a special table where she paints her gourds. She has been in the hobby of gourd art for five years.

Five years ago, Rosemary Catron opened the morning paper and saw a photo of a woman holding a gourd.

The featured article described things that could be done with gourds and Catron said to her husband, Rodger, "Let's go check this out."

The Catrons attended a meeting of the budding group, the Central Valley Gourders, an organization founded by Cecile Garrison, the woman in the photo, and several others to promote growing and designing with gourds. It was and remains an organization where there are no by-laws, no dues and no rules.

Soon the Catrons were accumulating tools, paints and embellishments for their own gourd designs. Rodger Catron planted his first gourd seeds in 2009 and the first finished gourd art appeared in their home in 2010. Now, at their Tulare home, they have a barn dedicated to drying and storing big, round gourds, long, skinny gourds and even tiny gourds, waiting to be a part of the next creative wave to flow through their household.

Rosemary Catron has always been involved in arts, dabbling in needle arts, calligraphy and making paper. She enjoys a weekly line-dancing class and gardening, as well as studying rocks and astronomy. When she looked at the gourds on the Garrison farm, her creativity was inspired with images of abstract, traditional and ethnic motifs.

"I love the feel, touch and smell of what can be done with gourds," she said.

She and her husband threw themselves into learning about growing, drying and the array of methods and materials used in completing a gourd-inspired work of art. She has taken a number of classes, locally and at gourd festivals around the West, to gain insights into the use of dyes and paints, carving and pyrography. She envisions her own designs, often incorporating an Asian influence.

When the Catrons considered building a studio where they could work on gourds and display finished pieces, Rosemary knew she wanted a storage room, a burn room and a painting room, as well as a larger workroom where her grandnieces could come to do projects. She likes to stand when she is carving or designing, so one of her worktables is tall and long, providing ample room to lay out project elements. The studio even has plumbing, so there is no need to leave the studio for a cup of coffee or other necessities.

Rodger Catron placed a 50-gal plastic drum outside with a locking lid, which can be filled with water. Here the dried gourds are submerged to loosen the cutaneous coating of the gourd and any mold that developed during the months of drying. After soaking a day or two, each gourd is scrubbed with a copper or steel scouring pad, leaving a smooth outer surface hard enough to carve with dremel-like tools or to accept wood burning. They work outdoors when cleaning gourds or doing those tasks that create dust, such as sawing or sanding. Working with gourds requires some attention to eye safety and protection from the gourd dust or burn fumes, Catron says, which can set off respiratory issues.

Rosemary Catron is most drawn to using pyrography in her art. She is fascinated and even comforted, she said, by the ancient technique of applying heat to a surface to create an image. She has several burners and considers each important for their own qualities. She will never give up her old boy scout-style burning tool even though it is slower and limited compared to the more sophisticated burners with their multiple razor, spoon and micro tips, she said. She recently ordered an extra fine chisel pen for doing Chinese figures.

Catron is a woman with many interests. 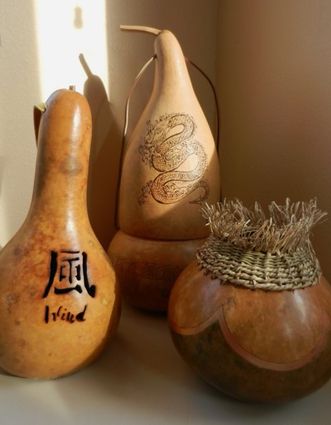 Some of Rosemary Catron's finished gourd art. Catron likes to work within an Asian cultural theme.

"There is absolutely no excuse to sit and stare at a TV," she said.

She has tried telling herself she will practice burning or carving an hour a day, but admits it does not happen. Her time constraints are influenced by her creative whim, but this year she is determined to put her attention to two things she really enjoys, line dancing and gourds. She is dedicating at least two hours a day, three days a week to "gourding."

Next year, she may go on to sculpting, watercolor or some other form of art in her master plan but will never give up her gourds.

Donna Luallen is a freelance writer living in Visalia with her

husband, Wayne. She is a master gardener who enjoys the outdoors including fly-fishing and also designs her own gourd art in her spare time.

Every two years the California Gourd Society holds a conference in Visalia, cosponsored with the Tulare-Sequoia Gourd Patch. Classes are offered in a variety of basketry and gourd techniques. This is an opportunity to see some of the best gourd art in the Western states.

The event is held at the Elks Lodge and is open to the public. The opening reception is Friday, April 25th at Arts Visalia, 214 E Oak Ave. The rest of the event, including classes on Saturday, April 26th and Sunday, April 27th, will be held at the Elk's Lodge, 100 W Main St. Visalia. More information can be found at the California Gourd Society website, http://www.californiagourdsociety.com.